as promised there is another empties post but this time only make-up items are included. Some of them are empty while some aren't but because I wasn't using them and were getting old so I decided to just toss them and make space for newer stuff. 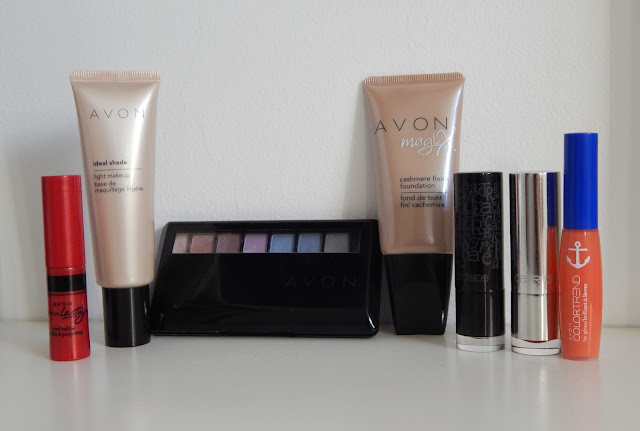 In the striking red packaging there is Avon extra lasting cream to powder eye shadow in the shade Mocha. It has a heart shaped doe foot applicator with an almost wet eye shadow on it but it dries in a matter of seconds so you got to work fast. The color is beautiful but a bit dark for me so I wasn't using it regularly. The other day I wanted to use it but it is almost dry now and hard to blend so I'm just tossing it away plus it is several years old so I don't feel to bad about it.

The two tubes are both Avon foundations. First is Ideal Shade light make-up in Ivory and it didn't cover anything. While the shade looks like it could match me it oxidize into an orangey color after a couple of minutes. Second one is Avon magix cashmere finish foundation which has more of a mousse texture and it really made my skin smoother. It is also in the shade Ivory but is is much darker and it didn't match me even in the Summer time. They are both really old (I'm talking years but I also didn't use them in a couple of years) so they need to go, I don't have enough space to keep expired make-up anyways.


In the middle there is my oldest eye shadow palette. It is Avon 8 pan palette in Water Colors at least that is what I believe the name of it is. It has a nice range of colors to experiment with but quickly I figured it out that I don't like most of the shades. The first one was my favorite, slightly peachy nude with a gorgeous sateen finish which I still used until last week when my eyes started to get a bit itchy whenever I wore it, that was a clear sign that it needs to go. Second, third and forth shade looked like bruises from different stages of healing on me so I never wore them in the public. The two blue shades were very chalky and looked the same once applied but I liked to smoke them on my lover lash line, I find that some blue color on the bottom lash line can look very refreshing but now I already have new blue color with which I can play and so I don't feel too bad when tossing them. When I started to use eye shadows I liked grey and silver so this color has a dent but since I grew older I started to use more and more warm browns and golden shades and so this one left forgotten. The last dark grey color also has some pan and was mostly used to fill in my brows or make a thin line on top of my lash line. I liked it a lot but I rather won't risk eye infections so it is going into the trash bin.


The last three products are lippies. First Catrice lipstick was part of a limited edition called un, doux, trois and I bought myself the shade Wear Berry. In the store it looked very appealing but in reality I rarely wore it. The color is very bold and I don't feel too comfortable wearing it. It also has a velvet matte finish (I prefer glossier formulas) and after drinking a cup of coffee it wore off in a very unpleasant manner. The only thing I really liked was the scent but other that that I regret buying it, I'm not saying it is a bad product, it is just not what I'm looking for in a lipstick.

In the silver tube there is one of my favorite lines of lipsticks. It is Catrice Ultimate Shine Gel color in the shade Sweet Macaroon. Soft pink color with a hint or pearly shimmer and a very creamy formula. That is exactly what I'm looking for in a lipstick and I used it up to the bone. If I convinced you that this would be something for you then I'm sad to disappoint you by braking the news that they are no longer available. Before they were gone for good I bought more than ten backups (don't judge, I gave some to my mom and some to my sister since all three of us were loving them). I still have five tubes of various color to go through and I will focus on them because I don't want to wait for them to  expire.


The very last item is Avon Color Trend lip gloss from a Summer limited edition and it is called Life Saving Coral. To me this shade is more orange that coral and that is why this was never my favorite and I actually use it mostly at home where no one saw me wearing it but it was moisturizing enough to replace classic lip balm. I still have two other shades which I like a little better and I will use them up soon.