today's empties post is filled with products and if I drop you a little hint, tomorrow another one will follow with only make-up products. 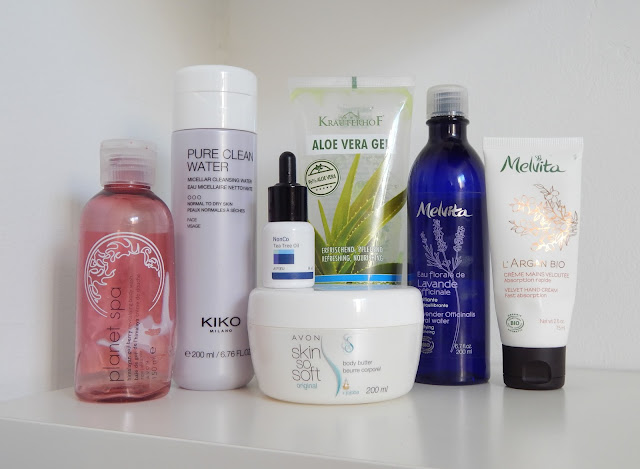 First bottle is Avon Planet SPA Himalayan Goji Berry body wash. This was discontinued a while ago but the scent was so lovely that I wanted to keep it forever. How foolish, right? I used it up before it went bad and I thoroughly enjoyed it. I haven't noticed any special moisturizing properties, it washed my body like any other regular wash and for the slightly higher price I wouldn't repurchase it even if it would still be available but I would buy the lotion in the same scent.

My sister bought me this Kiko micellar cleansing water which I liked very much. It had nice floral scent and it did it's job, took off all of the remaining make-up. Since Kiko isn't available here I won't be buying it again but if they would open the store nearby then maybe I would.

The little bottle of A'pieu tea tree oil is already a repurchase and I have another one to replace it. What can I say about it that hasn't been said before? Tea tree is an ingredient that works for my oily and acne prone skin, I think that little suckers drown in it when I apply it at night since usually they are smaller or gone the next day. I started to use it also on days when my skin is 'nice' and it looks like it stops little buggers from appearing, not completely but my skin definitely improved (along with a healthier diet, lots of water and some serious reduction of diary).

Underneath there is an amazing body butter from Avon Skin so Soft line. It is the Original with jojoba oil. The consistency is slightly thicker and it takes a while to absorb. Maybe it is not the best to use in the hot Summer because it can feel sticky but because of the scent it is worth it. I can't put my finger on it but it smells nice, sort of comforting and warm. It reminds me of that classic Nivea scent. I still have one or two backups that I need to go through but I will save them for cooler months.

Krauterhof Aloe Vera gel is a product that I don't recommend. No matter how cheap it is don't buy it. I made a mistake and bought two before trying it out first. Aloe Vera is known to soothe and calm down the skin, this bad boy must have acid inside because it almost burn of my face. After I applied it on a freshly washed face I started to feel some weird tingle, after ten minutes I cheeked my face in the mirror and it was bright red. Even after I washed it off some of the product absorbed and it continued to irritate my skin. Next time I put it on on a burn (silly me got burn on the hot oven when I was trying to take my pizza out), first I stick my hand under a cold water but you can't stand there for half an hour, right? So I put this gel over it because I thought it will help, instead it started to burn even more. The only part of my body that doesn't mind are my hair. I used it as a hair gel and that is how I plan to use my second tube of it and then never again.

Second to last is another legend of mine, it is Melvita's Lavender Floral Water. I had a sprayer on but now I reused it on the second bottle. This smells just like lavender and I personally love the scent as I find it very comforting. I usually use it over my make-up to help the cream products blend with each other and mesh with the skin. It does make my skin glossier and it doesn't prolong the wear of make-up so it is not a fixing spray but a true refresher and a moisture booster when you need it. This was my second bottle of it and the third one is already sitting pretty in my bathroom.

And the very last product for today's empties is Melvita's argan oil hand cream. It had a nice scent similar that their Golden oil with a mix of five oils (one of them is also argan one) but it felt a bit heavy, not like the rose one which was way to greasy for me but still a smidge to heavy. I won't repurchase it even though it smelled nice.


Thank you for reading and have a nice day
Posted by Bear Woods at 7:23 AM