I was regularly checking when Essence will announce which items will have to say goodbye and which items will replace them and yesterday I finally found the list of discontinued products on their official webpage. As always I  made a little scrapbook of items I would like to see in person, swatch and decide if I 'need' them in my life. This list is just a note for me what to check when I will be in the store next time. 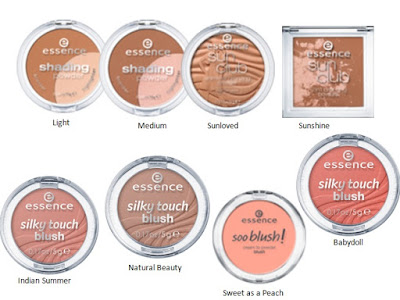 Lets start with the  face items first, as it looks like I have loads on my wishlist but I will only get one bronzer and maybe one blush, two products the most out of those 8 items.

Next is the Sun club shimmering bronzer and I hear that it smells nice, I will make sure to sniff before purchasing ;) I like the shimmering cheek products so I don't mind that it has some glow.

The last one looks the most appealing to me, at least in the packaging. You can focus only on one color or swirl them together for shimmering effect also the color looks like it would be really nice.

On the bottom there are blushes and first one, Indian Summer looks like a nice light, everyday color.

Natural Beauty looks like  nude blush or maybe it can pass as a bronzer and I will make sure I will take a good look at this one as it is among my favorites.

Peachy, cream to powder blush is nothing special, in terms of color, I already have two very similar shades so I think I don't need another one but peach blush is my favorite.

The last one in Babydoll looks very different on swatches, sometimes it comes across as a peach, sometimes it is more of a coral shade and sometimes it leans on the pink side. It is a chameleon and  I really need to swatch it and then decide if it is something I would wear. 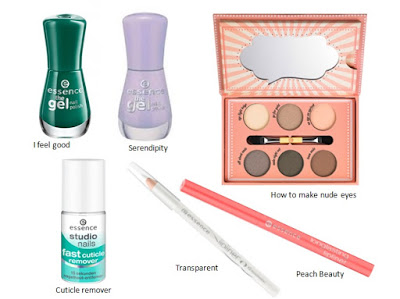 Here I combined nail, eye and lip products since I didn't pick a lot. Apparently they are getting rid of unappealing items, at least for my taste  ;)

The two nail polishes are very different, green isn't a color I would wear often but something in this rich green caught my attention. The lilac shade is nothing surprising, it is probably my favorite nail polish shade but I do have a lot of lavender nail polishes and I really don't need another one.

Cuticle remover is kind of self explanatory item, I have never had anything like that and I thought I could give it a go.

The nude inspired box of eye shadows got my attention. I like the shades but recently I bought a lot of eye shadows and I should be good for a couple of years. The other thing is cardboard packaging, I don't like it. If I would end up buying it I would demolish it and stored pans somewhere else. I would for sure throw it away, so is it really worth getting 6 new neutral shades if I will have to get another packaging to store them?

The last are the two lip liners, peach shade borderlines on coral and since I don't own any coral lipsticks I thought I could at least have a lip liner in this shade but I just ordered similar one from Avon, if they will look similar then I don't need this one.

The last one is maybe the least interesting but the one I definitely need and I also plan on getting backups. I already own it and I love it, it actually makes me sad that they don't see the potential it has and will retire it.

Huh, that was long but if you are a fan of make-up you can also probably talk about it for hours, am I right?