it is this time again when I document what I manged to use up in the first half of the month. I'm trying really hard not to buy products if I have backups and so, I'm slowly but surely using up my stash. Here are another five items that come to an end. 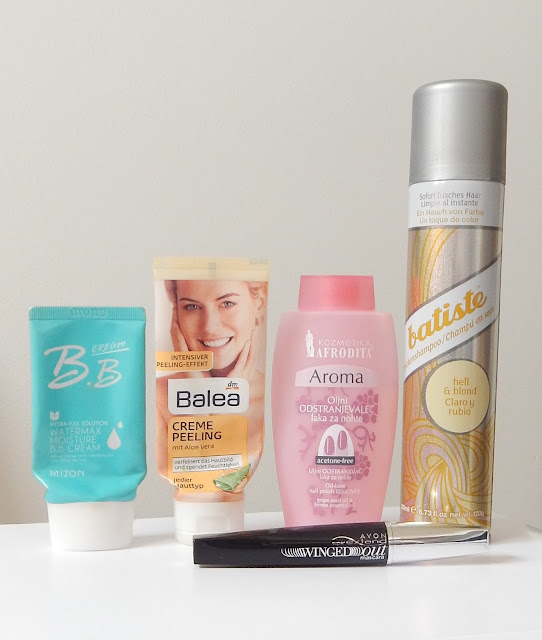 First we have Mizon watermax moisture BB cream. The shade was a little too dark and it had weird formula. When squeezed out of the tube it looked normal but when you start blending it out small water drops formulated, I was shocked even on the last day before using it up. I don't know what kind of magic that is but it is very cool. Well, back to the formula, the shade was slightly to dark and it had very low coverage, I used it on my neck and chest area. The low coverage didn't convinced me so I won't repurchase it.

Balea face scrub with aloe vera was nice. It had a lot of scrubbing particles which made it very efficient but moisturizing at the same time, my skin was left nourished afterwards. I would definitely repurchase it if it would still be available.

I already talked about Afrodita nail polish remover with grape seed oil. It smelled nice and while it says it is acetone free it worked very well as I didn't need to rub to much. I have some other ones that I want to use but probably I will repurchase it soon. If you are interested in my review about this product you can read more details here.

The tall bottle is another Batiste dry shampoo, this time in the blonde version which I prefer. The smell is awful but it works like a charm. I already bought two (they were on a sale).

Avon super extend winged out mascara in black/brown finally died. It was magnificent mascara which managed to separate and elongate my lashes beautifully. I have some others that I need to use up but this one is on my list to repurchase.