as promised today I'm showing you the second part of my empties. Most of these products took me a lot of time to go through and it is just a coincidence that I used them all up in this month. 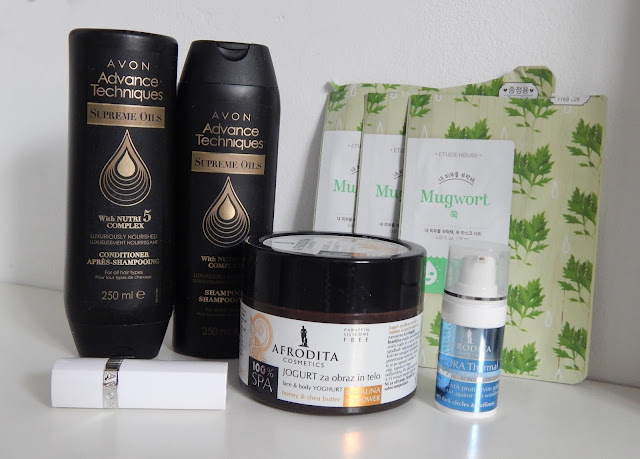 First we have black twins, Avon AT supreme oils with nutri 5 complex shampoo and conditioner (I rarely use them up at the same time, usually shampoo is first but I wanted to treat my hair and used a little more conditioner and I manged to empty both bottles at the same time). The scent is slightly different from their usual AT, which I love, but this was even better. So warm, spicy and oriental. My hair smelled like this for the whole next day and I just couldn't stop sniffing them  ;) They were moisturizing but not making my hair overly greasy and cleansing at the same time. I really don't know what else to say, they aren't the best I have tried but they get close so I would repurchase them in the future.

Three empty green packages are from Etude House and each contained one sheet mask with mugwort extract. It is supposed to be soothing and have brightening effect. I woke up a little earlier in the morning and washed my face, put one of the sheet masks on and went to bed. They can slide off so laying down is the best way to prevent that. I just left it on until everything fully absorbed and sheets were really soaking wet so it took around 30 minutes, my skin felt moisturized and soft but after three masks I can't report anything about the brightening effect. I noticed that there was still some of the liquid left in each packaging after I already took the mask out so I used it instead of moisturizer and it worked, out of each bag I got three to four individual uses. I thought that they were nice but a little overpriced, I payed a little over 1 € for each and to me that is too much. I won't repurchase them again but I have some others already at hand.

Up front there is Avon tinted lip balm in the shade Soothing Strawberry. I dedicated the whole post to it here. I loved it to its very end. The color is a nice red one, it is very pigmented, slightly wet looking, after a couple of layers it does leave a stain and it is moisturizing. It has it all but sometimes I want a clear lip balm. I would say that this was my favorite tinted lip balm and I would repurchase it again.

Big pot in the middle is Afrodita's face and body yoghurt with honey and shea butter. I talked about it in a separate post here. I still love the luxurious scent but to really get all of the moisturizing benefits you have to stand in the shower for at least five minutes and honestly I don't have time to do so. I already purchased the second one but after that I don't think I will buy another one. It is a nice product but it takes too much time to use it properly.

The last items is also from Afrodita and it is their Hydra Thermal eye cream. I posted a little more about it here and my first thoughts after using it a little less than a month were so so. Now when it is gone I realized just how good it was. I feel that my under eye wrinkles are more obvious and the skin is more dry. I am using different eye cream but apparently it doesn't do enough for me. I will for sure repurchase it again since I haven't found better one than this Afrodita one.