brand ARTDECO launched collection to celebrate their milestone and it is called Art Couture. From them I only tried their magnificent eye shadow primer but this time I opted for some eye shadows. They had 30% off and I splurge a bit.

They released new magnetic packaging to keep new long lasting eye shadows in. It is beautiful and glossy but that also means that fingerprints show up. 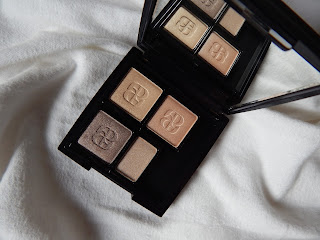 I went with three of the long lasting ones and one regular. They had a deal if you bought at least three shadows from this LE you got the magnetic box (it retails for 12,99€) for free. Originally eye shadows which are part of the collection cost 7,49€ and contains 1,5 g. The smaller one which is a part of their regular line costs 4,99€ and contains 0,8 g.
I haven't made any swatches or used them yet. They are so beautiful to watch and I don't want to ruin them.
Does anyone else does that?