it is the end of the month and I again used up a handful of products. I have to say that I enjoyed using most of them up and I'm about to finish a couple more but they will be featured in the next empties post. 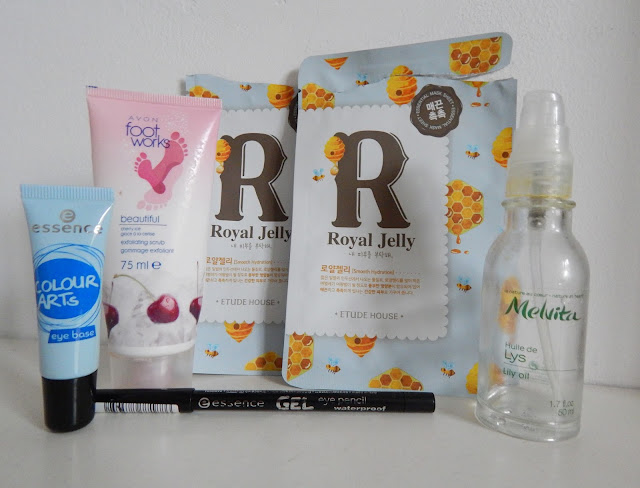 First tube is  Essence colour arts eye shadow base. They had these available with the pigments in little pots but I wasn't really interested in those but I was looking for an eye shadow primer which would prolong my shadows. The texture of it was nice, not to liquid or to hard, just right and it was colorless and without shimmer. For my oily lids this product worked just okay, in combination with some shadows it lasted 7-8h but with most less. Last year in April I bought Artdeco primer which works so much better for me and since then I haven't used this one. I think it is time to toss this tube even though it is still full but since I'm not using it and I found better alternatives I can ditch it.

Second tube is Avon Foot Works scrub in a Cherry Ice scent. I love their limited edition scents and pretty much always I pick some but I don't use them on my feet (if I do it tickles me, I use piles on my feet) but on my face. I know, some people will be grossed about it but if you close your eyes and don't know that it is meant for the feet it makes sense. The scent is too nice for feet and there are plenty of  particles which makes exfoliating really easy, you don't need to press too hard but instead you massage it gently. I already miss this lovely scent but I'm replacing it with the papaya one.

Pencil s Essence Gel waterproof eye pencil in black. I remember I won it a couple of years ago (I wouldn't get the black one for myself) and I used it for a while but since I wasn't too impressed with it (on my hooded eyes it smudged and I just don't like pitch black color on my eyes) I put it on the side and now I wanted to start using it but the whole tip broke and fell out. Fortunately I have sharp reflexes and I caught it but the pencil itself is so hard and dry that I can't get much out of it so I'm tossing it. It is completely my fault, I know that I have way too many pencils so I'm making a point in using them up and not buying new ones until I use some. 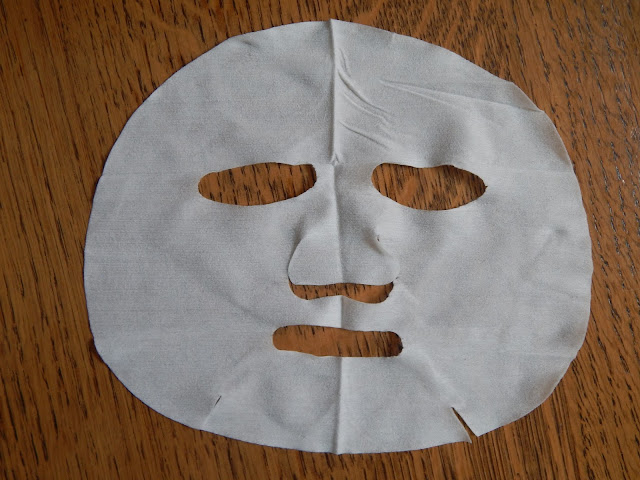 In the back there are two more Etude House Royal honey sheet masks (I used one previously) and on the photo above is the actual mask (I was surprised at how well it fits my face, apparently it is very round). I'm still in love with the scent and this time I did noticed that my skin looked more plumped and hydrated (probably because I used two of them). I would like to point out that there is plenty of the liquid left after you take the saturated mask out and I have been using it as a liquid moisturizer which took me another four days of using one pack up completely. I think I will repurchase it again in the near future.

The last item is Melvita Lily's oil. It is supposed to help you fight against skin discolorations, hyperpigmentation, acne scars, restoring luminosity and radiance, for all of these I can verify. My skin has improved dramatically and I think the main reason is this 'miracle' oil. If you were wondering this is my second empty bottle of it and I already have backup of it and I will see if I will even need to buy the fourth bottle or my skin will look nearly perfect at this time next year.

Huh, that was a handful and at the same time so relaxing. Knowing that I'm using products and they work well for me is the best. After two weeks I will have another empties post and I'm afraid it will be bigger.

Thank you for reading and have a nice day
Posted by Bear Woods at 4:50 PM