what a crazy two weeks have been. My computer decided to let me down and I hope I found the problem and fix it otherwise I will need a new laptop. So, dear Saint Nicholas... but before that I decided to gift myself with some Avon products. 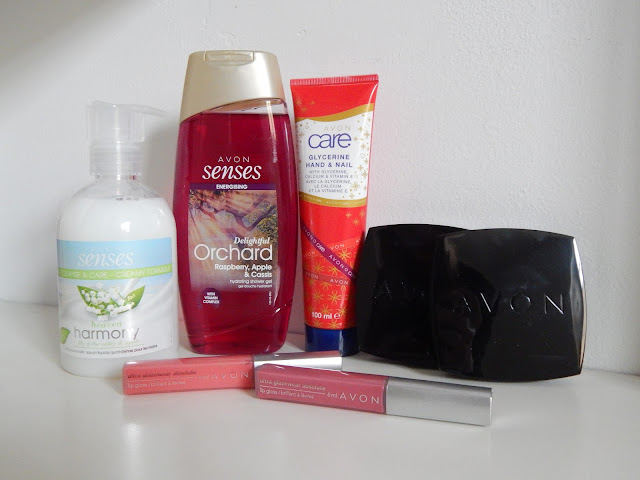 Previously I ordered huge bottle of Senses Heaven Harmony Lily of the valley and Apple body wash and since I love it so much I decided to get the smaller version as a hand soap.

To go along I picked up another Senses body wash in more Summery scent which is named Delightful Orchard Raspberry, Apple and Cassis. This smells wonderful and it reminds me of a fruit drink with Sour Cherries and Cassis.

I couldn't pass such a good deal they had on their Care hand creams, I picked up my favorite in the limited edition packaging. They do this twice a year and almost always I pick it up because they don't mess with the awesome glycerine hand and nail cream formula.

The two compacts could be quatro eye shadows (they had amazing deal on them but I managed to resist) instead I picked two true color luminous blushes out of the four available shades. I skipped on the peach shades but only because I have enough so I picked up rather unusual shades for me. One is Deep Plum which is a pinky mauve shade with tons of golden shimmer, I'm a fan of shine on my cheeks but this could be too much. The other one is named Classic Aura and is more of a peachy pink shade which appears almost matte, there are some random barely there particles but probably after applying it they are not even visible. I will know more after trying them out and I will also try to make photos of the shades because I noticed there aren't many online and probably it would be helpful to someone.

The last two items are lip glosses and not just any kind of glosses, these Ultra Glazewear Absolute glosses have one of my favorite formula and Renewing Rose is my favorite shade which I'm almost done with the first tube. I decided to pick the Soft Peach shade because you could only get even number of products and I didn't want to pick two of the same shades.
P.S. I hope I'm mistaken but a little bird told me that this line of lip glosses will get discontinued next year, that is why I stocked up.

Thank you for reading and have a nice day
Posted by Bear Woods at 4:21 PM