this time around I'm having a lot of face products. I'm trying a lot of new stuff and some older ones that didn't convinced me have to go. 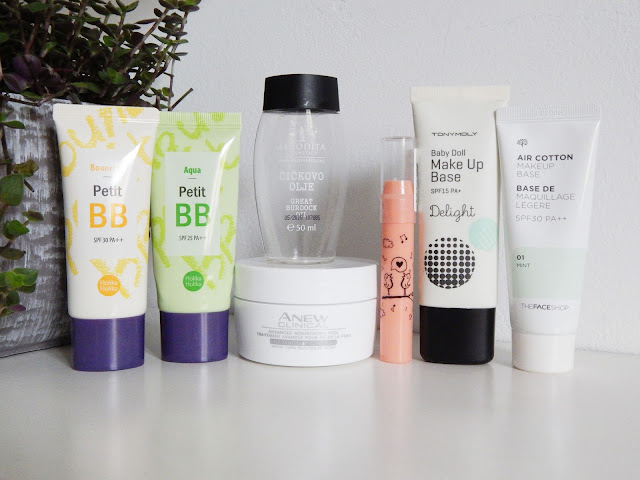 First and second tubes are two Holika Holika discontinued Petite BB creams. In the yellow packaging is Bouncy with nice coverage but way too dark for me so I barely used it. Second is Aqua and while the shade matches me better it has barely there coverage so I only used it on my neck to connect my face with the rest of my body.

The white tube is my second Avon Anew clinical advanced resurfacing peel with 10% glycolic acid. Inside you get 30 soaked pads which you rub over cleansed face and if you have some dry skin, acne or just sensitive skin it will lightly burn or tingle. It didn't bother me too much but I wasn't using them regularly so I can't tell if they worked for me. As I mentioned this is my second pack but I won't be spending my money on something I'm not even sure if it works for me.

The bottle on top is my beloved Afrodita great burdock hair oil. I swear that this oil is magical as it helps my hair grow faster (even my sister and mom can verify that because they both are using their own bottles of it). I talked about it here.

This lip balm was sent to me but I was so interested in it that I would probably spent my own money on it but at the end I'm glad that I didn't. This was very average balm that did very little for my dry and chapped lips but it smelled so nice, like a true Mango. It is from Essence & the lovely little things LE and was named & we kissed.

The last two tubes are both from Korean brands and are green make-up bases. First is Tony Moly Baby Doll make up mint base and second is The Face Shop air cotton green make up base. I did buy them on two different occasions and were my first make up primers and at the beginning I was excited about them but later I discovered better ones so these two were left forgotten. I know I had them for so long and that they probably already went bad so I'm tossing them before they start to reek.

Thank you for reading and have a nice day
Posted by Bear Woods at 9:10 PM