it is almost the end of the month and I'm back with my empties post. It will be divided in two parts, simply because I used too many things and this post will already be long. 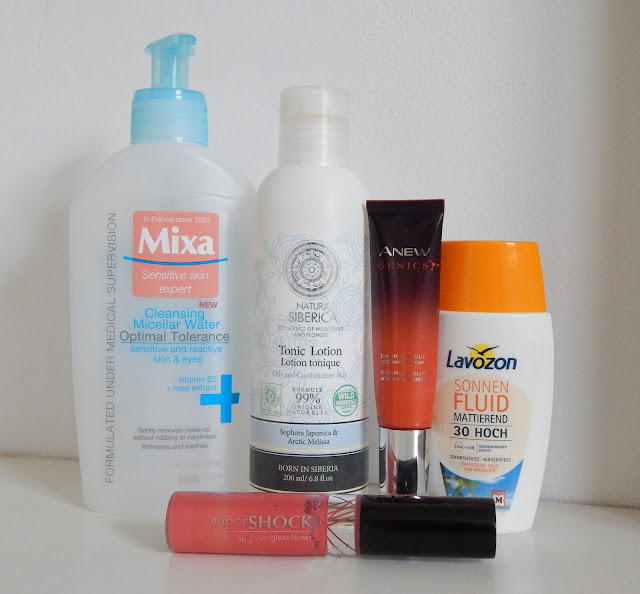 First one standing is Mixa cleansing micellar water for sensitive and reactive skin & eyes. It was a clear and scentless watery liquid which I tried to use as a make-up remover and it didn't do to well, it only manged to push make-up around but it didn't remove much. They also have the regular one which I haven't tried yet but this one didn't give me much hope. I eventually used it up after make up wipes and face wash, just to make sure there is absolutely no make up left and also to slightly moisturize my face after extensive cleanse. It did calm down and moisturized my skin but not enough, so next time when I will shop for cleansing water I will skip this one.

Natura Siberica makes this tonic lotion which still leaves me a bit puzzling at how to use it properly. You see, the texture is creamy like cleansing milk but the instructions at the back tells you that you put it on a cotton pad and apply all over clean face. It is not meant to clean but to moisturize and I'm just not used to using such creamy products as moisturizing toners. The texture of the product don't match what it is supposed to do, at least not for me but after two or three weeks I got used to it until I figured it out that it was causing my skin to break out, heavily. I finished this product in the shower where I mixed it with my body wash. I definitely won't repurchase it again.

Next we have Avon Anew genics dark circle corrector eye cream. I feel like it wasn't so long time ago since I started using it. It had an interesting safety opening which is convenient for traveling but I still manged to squeeze some product into the cap. It had a little pigment pearls in it which camouflaged some under eye darkness, I'm pretty fair and the shade wasn't to dark. I appreciated the formula as it was moisturizing but at the same time it sink in really fast. I would repurchase it again but considering not so low price tag and how fast I used it up, I will try something else next time.

I finally finish this sun cream which is from Lavazon sonnen fluid SPF30. I talked about it in May and since I figured it out that it breaks me out I was using it on my hands whenever I went out. Someone might thought that I haven't used much protection since this bottle is small, 50 ml, but I was using some other creams in conjunction. It was alright for my body but definitely not okay for my face.

The last item is old Avon Super Shock lip gloss in the shade Melon Madness. These bottles are huge, they hold 12 ml of product and I manged to use maybe a quarter. The scent remind me of melon so first I thought there is connection with the name (I bought two other shades and they all smell the same) but it isn't. The scent is still nice though. The main issue is the color. Don't get me wrong, I like coral glosses and even the little golden shimmer doesn't bother me but this is so pigmented, basically the color you see on the photo is what you get on your lips and you can't sheer it out much. I figured that I haven't use it in over a year so I think I won't miss it. I like this line of glosses and if they would still be available I might pick some shades but only if they are light, sheer.

Stay tuned for second part of my empties.

Thank you for reading and have a nice day
Posted by Bear Woods at 11:00 AM