the end of the month is here and it is time to discard all of the empty packaging that I collected in the past two weeks. 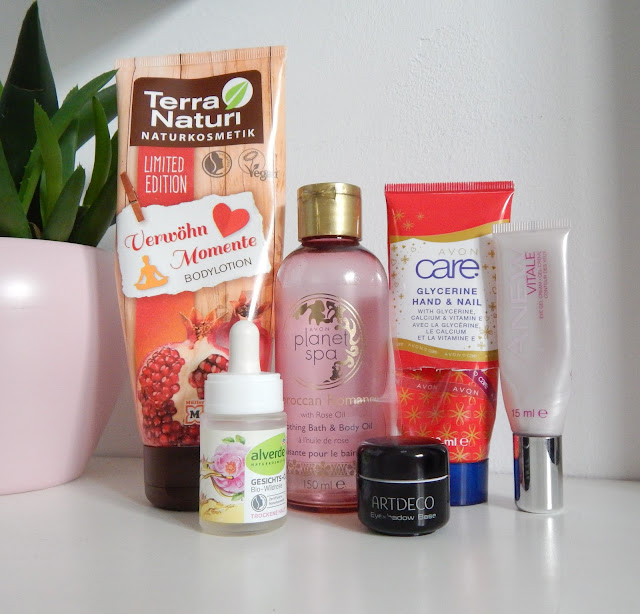 Terra Naturi Pomegranate body lotion. They say it is limited edition but I bought it at least last year if it is not even older and it is still available. I loved the relaxing scent of pomegranate and I can detect some of that typical 'cream' scent which I find very comforting and nice. Was it moisturizing? I think it was, nothing super hydrating but good enough for my skin. At the moment I have loads of lotions that I have to go through first but if it will be available when I will clear out my stash I would repurchase it.

Next to it is the second body moisturizer for the month and it is Avon Planet SPA Moroccan Romance with Rose oil body oil. It had that typical rose scent that I'm crazy about but this line was available for only a short amount of time. I did bought myself a backup and when that will be gone I'm sure I will be able to find something similar in the drugstore.

There in the special packaging is my favorite hand cream which is Avon Care glycerine hand and nail cream. This absorbs fast, doesn't leave greasy residue and helps calm down and moisturize my hands like nothing else plus it is very cheap. I always have this one in stock and this time it is not an exception.

The last tube is Avon Anew Vitale eye cream. It had a thin formula which absorbed fast and it did hydrate my skin. The only issue I had with it was that it irritated my eyes sometimes. It is not that I put it too close to my eyeball but I figure it out that when it absorbed it irritated my eyes from the inside. I know that because the burning feeling happened after a couple of minutes of applying it and even when I was rinsing them it didn't help that much. I learned my lesson and apply very little at the time and that is how I avoided the nasty feeling but it also took me a while to finish it up. Needles to say that I won't repurchase it.

Alerde makes this Rosehip face oil that I love so much. It only comes in 15 ml packaging but it has a nice pump to get just the right amount. I have been a fan of it for years and it really helped to calm down my skin so it is not as red and irritated. I talked about it here  and I still agree with it. The next time I will be at the drugstore I will pick another bottle.

The very last item is Artdeco eye shadow base. It is skin colored (it matches my fair skin) and it has some silver shimmer which doesn't bother me because I usually opt for shimmery look anyways but if I decide to wear matte on the lids my shadows are capable of covering the shimmer up. I tried a couple of primers and nothing worked until I stumbled upon this one. It looks tiny but it also lasted me for more than two years, you simply don't need that much of it. The last time I was in the drugstore and I actually wanted to pick it up they had 30 % off of everything and I got myself a new one which is just as good as this used one (you know, sometimes they change the formula when you're not looking and thankfully they didn't do that with this little pot of magic).


Thank you for reading and have a nice day