last month I skipped this post all together. I didn't have anything to show it to you  but this time I have used up some or I decided to part with them. They are all small 5 ml bottles but they still take time and lots of manicures to get through. 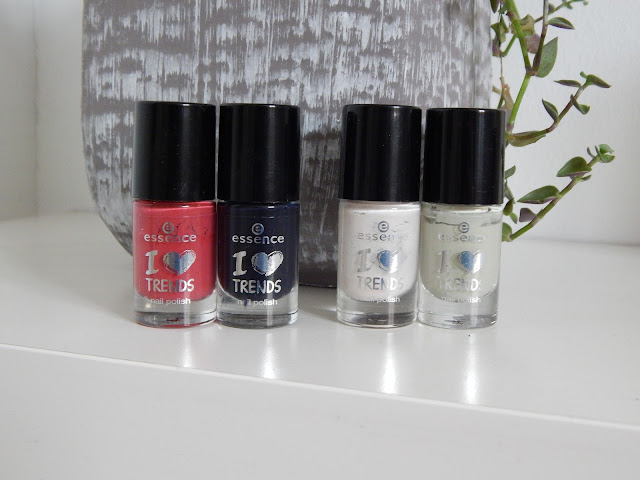 All of them belong to Essence 2015 advent calendar collection. I found so many lovely shades but now I noticed that the formula on these is not getting any better so for this year I set myself a goal to go through all 20 of them.

First is From me to You shade. It is hard to describe but if I try I would say maybe brick red, it is muted and not bright. I liked it until I found another one from Catrice (Coachella Vibes) that is very similar but a bit brighter and I like that one better so I gave this one to my sister and she loves it.

Next is deep blue The Night of Magic but on the nails it usually just looks black. I know I would never buy it myself because I always thought that black nail polish isn't for me but this one proved me wrong. I made sure that it always looked nice, no chips or nail tip and I think I made it look elegant instead grungy. Now I want another bottle of black or almost black nail varnish.

Made with Love is a light cream that is a smidge sheer after two coats but I liked that a lot. This has to be one of my favorites and I have to find something similar. I know this type of shades aren't exactly hard to find but I want something that is also sheer so it is easy to apply, fuss free but at the same time it looks so very polished. Any recommendations?

The last one is pistachio green Meet me at the Chimney. At first I wasn't sure about it. This shade was so different but the moment I put it on I loved it. While it was drying I thought that it would look cool matte but masterminds behind Essence beat me at it because it already have matte finish. It looked so great but application wasn't the best (mattes!!) and now I noticed that it started to separate and I just don't want to deal with the formula so I decided to trash it but I will be on the lookout for a similar shade with a glossy finish, I have a matte top coat so that can be solved pretty easily.

Thank you for reading and have a nice day
Posted by Bear Woods at 5:58 PM