this month ended in a snap so as it seems, right? Am I the only one?
I have used up an array of different products and I have to admit that most of them didn't convinced me to repurchase them again, I say most not all. 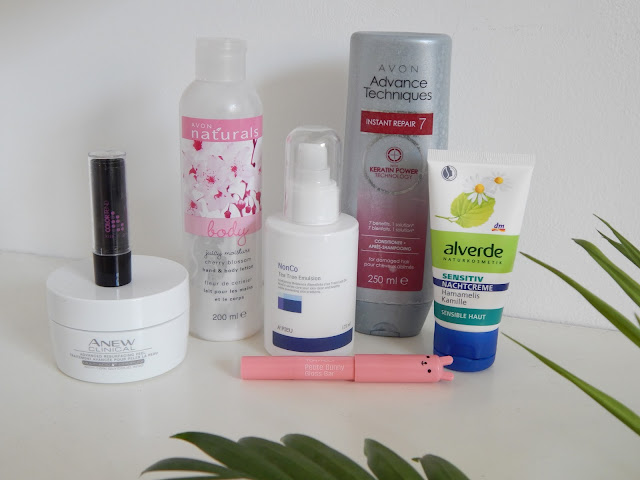 I will start with Avon Anew clinical advanced resurfacing peel with 10% glycolic acid. Inside you get 30 soaked pads (I suggest storing them upside down or occasionally flipping them). I used them on clean face in the evening and often I experienced light tingling which resulted in red skin (I have very sensitive skin and pretty much everything makes it flip) but that is the reason I used it only at night so my skin got some rest over night. I should use it ever third or fourth day but I didn't, I was too lazy and therefore I didn't see strong results. I thought that they aren't worth it, I'm not blaming the product but my lack of using it but a couple of campaigns back they were so inexpensive that I bought another box and now I promised to myself that I will use them regularly and see if they are really worth it.

The lipstick on top of it is my oldest one and it is Avon Color Trend in the shade Vino Disco. The shade is gorgeous, deep wine with some light in it (it is really hard to describe, you should see it in person). I decided that I will toss it at the end of May since it is so old that I'm scared to use it but it remains one of my favorites (If it would still be available I would get it in a heartbeat). 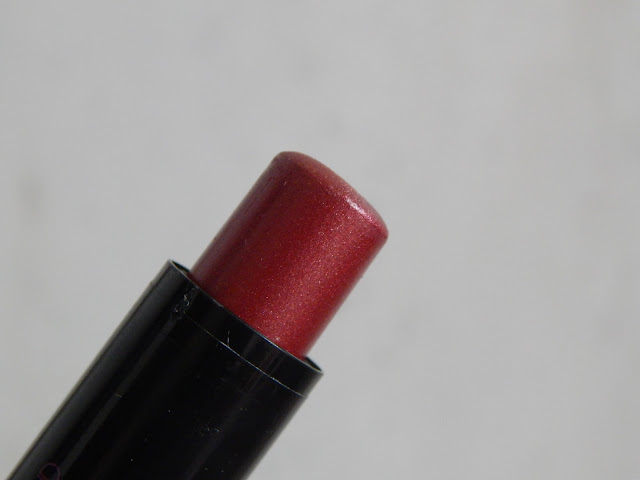 On the first swatch there is just one swipe so you can see the crazy pigmentation and beautiful color but I wore it as a stain, softly blended out which is shown on the second swatch. Worn like that it easily survived a meal or coffee run. To me this formula was perfection and I can only hope that Avon will once bring it back. 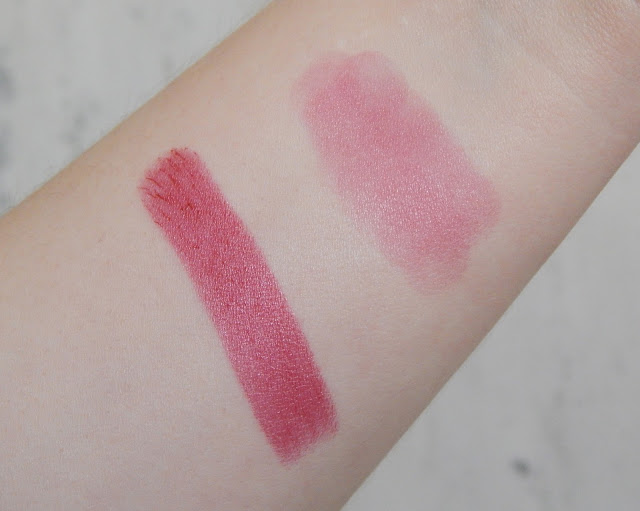 Avon naturals body lotion with Cherry Blossom was nice. To me it smelled more like gummy Bears than cherries or cherry blossom but I was okay with it. I liked the light texture which absorbs fast and makes my evening ritual shorter. I like this line of moisturizers but there are so many different scents that I want to try that I most probably won't repurchase this particular one again.

A'pieu nonco tea tree emulsion was a nice addition to my evening skin care routine. I used it all over my freshly washed face and then topped it off with some kind of oil, if my skin felt dry I used some night cream on top of it as this alone wasn't moisturizing enough (emulsions aren't even meant to be used alone). Under the line I liked it but I don't think it was anything special so probably I won't repurchase it.

Let's jump onto the hair care with Avon Advance Technique Instant Repair 7 conditioner. Last month I used up the shampoo and I wasn't impressed and I said that the conditioner is better, especially for dry hair. Now I have been using it in combination with different shampoo and I haven't noticed any big difference and that makes me think that the shampoo from this line really isn't something I would promote but the conditioner is nice but probably I won't buy it again (there are way too many hair treatments that I want to try in the near future).

Second to last is Alverde night cream with chamomile and hamamelis designed for sensitive skin. I can't remember when exactly I bought it but it has to be more than a year ago. I had way too many night creams and this one was just waiting to get its turn and after I opened it I noticed weird scent but after a couple of minutes it settles and I can definitely detect both herbs mentioned in the name. The texture also doesn't feel right, it is a bit grainy and it makes me think that it went bad so I'm too scared to use it anywhere on my body so I'm tossing it. Will I buy it again? Nope, and I am on a face cream ban until I finish all of them up.

The last item is the cutest, it is Tony Moly Petite Bunny gloss bar in the shade Juicy Peach, I made a whole post about it here. It is cute little pencil styled lip balm that smells like an undefined fruit and it is pink tinted. The moisturizing properties are poor and therefore I won't be spending my money on it again but the packaging is really cute.

Thank you for reading and have a nice day
Posted by Bear Woods at 12:30 PM