I am in a serious declutter mode and that goes for all material aspects of my life. I'm constantly giving away bronzers, blushes, highlighters, eye shadows... never in bulk but just one or two every week or so but this time I attacked my lipstick 'collection' and I was surprised at how many of them ether went bad or I just don't like the color or formula on me, so I decided to pile them up and have one bigger declutter on my blog. 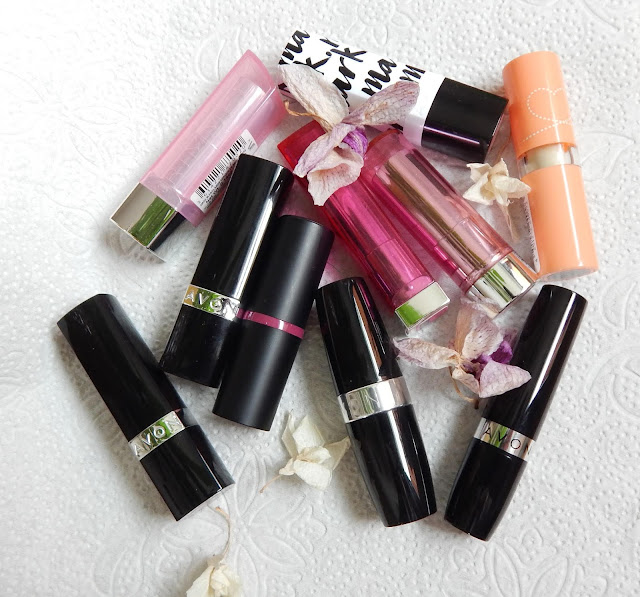 Yep, that is ten full sized lipsticks that I'm parting from. 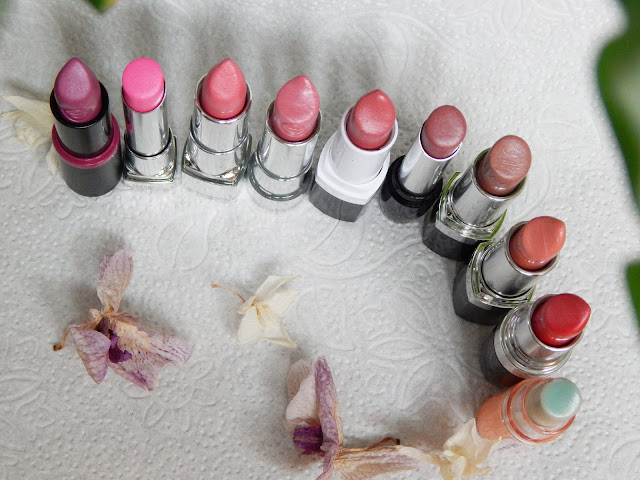 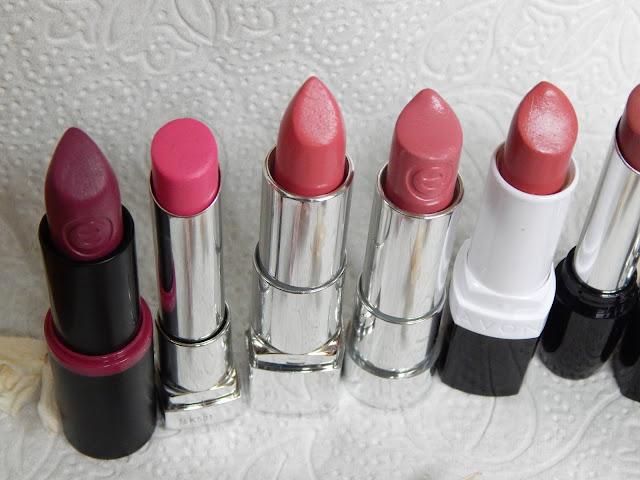 Essence Longlasting Wear Berries! was a lipstick that I wanted to buy ever since they came out and everyone was praising them. The formula is really amazing but unfortunately I picked this darker, bolder shade that I maybe wore three times. Thankfully I picked up another more wearable shade before they discontinued them.

Maybelline Color Sensational Faint for Fuchsia was an impulse purchase. I think I got it at the 30% off sale and there weren't that many shades to choose. Again I really like the longlasting formula but a bright cool toned pink just isn't something I would wear often. I think I will check their stand in the future to find something more natural looking because I think that the formula is really nice.

Rimmel Moisture renew Sheer & Shine Glow-rious Pink was a lipstick I bought last year in November but I only recently tried it. I liked the sheer & shine claim and I picked a soft neutral pink but the first time I put it on my lips something was off. A minute after application I got a bitter taste in my mouth that came from that lipstick. I don't know if that is something 'normal' or it went bad but ether way I'm tossing it after wearing it a minute and a half, such a waste of my money.

Essence Sheer & Shine Candy Love has a similar line name as the Rimmel one and on the swatch it does look super glossy. This one was one of my top favorites so I'm extra angry at myself for not being able to just use it up before it went bad (gunky texture made it unusable). I have loved everything about it, I even got my mom hooked on but the 'new' Color up! Shine On! line is very similar in texture but I don't think they have a similar shade available (I hope they will come up with something similar in January, fingers crossed  ;).

Avon Mark Rose Kisses is something I purchased immediately after they released this line and after the first application I knew that this is not something for me. It is very pigmented and creamy which is a good thing but I just personally don't like super pigmented lipsticks and on top of that I even don't like the shade that much. Whenever I put it on I just couldn't prepare myself to leave the doors wearing it so I think it is time to part with it. 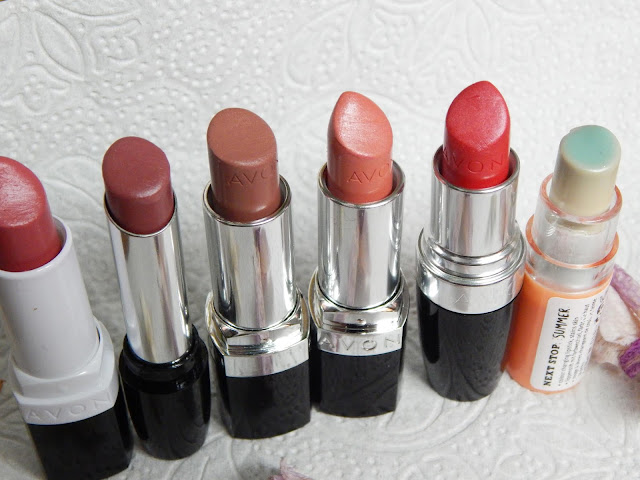 Avon Indulgence Tawny Rose is a line of skinny tall bullets. I had two other bright pinks but I got rid of them already because I wasn't wearing them. This one on the other hand is one of my favorites. On me it looks more pink than nude and the formula is very nourishing. I don't think they are still available but if I could find it I would get it again.

Avon Ultra Color Latte is an oldie but a godie. For a long time this was my favorite nude and I actually wore it quite a lot but for the past two years I really can't remember when was the last time I used it. Now I prefer to wear more light pink shades and this one got overlooked. It is really old so it must to go but if I will feel the need to wear a nude I will get it again.

Avon Ultra Color Tempered is another one from the same collection but this particular shade was a limited edition. I did wore it a bit but then I left it in the dark and never picked it up. It has the same amazing texture (buildable coverage, creamines, slight sheen and lovely lasting power) but the shade seems a bit too light, too pastel for me so I will get rid of it.

Avon Ultra Color Rich Country Rose is another one with the same texture except mine is an older packaging. This shade is still available and it still looks the same. It is an amazing bright red with unique silver sheen. My favorite but I wear it so rarely and this packaging is a constant reminder that it is way too old.

Essence Next Stop: Summer Wish I was a Mermaid lipstick is a color changing lipstick. In the bullet it looks green but on the lips it is just clear and then it slowly starts to get a bit of a peach hue. Very very faint but I used it mostly as a lip balm bu the last time I saw how weird the color looks like. On the bottom is almost white and then it starts to get gradient and the top is dark green. I know that it was even when it was new and approximately a month ago it still was. I'm scared that it might went bad so for the sake of my health I'm tossing it away. 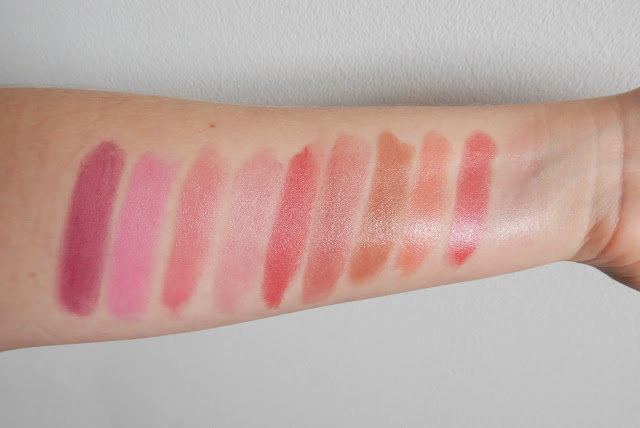 Here they are all swatched and since there are mostly pink tones I can see a nice variety in shades and tones, at least I don't have gazillion lipsticks all in one shade  ;) 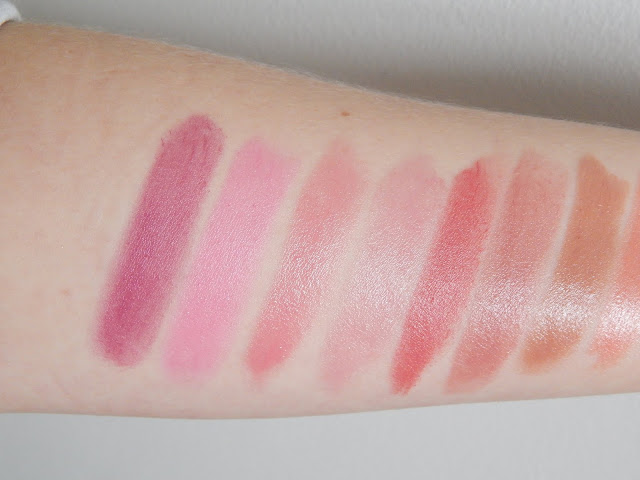 Wear Berries! is the darkest and the most dramatic. I think that it looks nice on me but if I'm not in the right mindset with enough confidence then it is pointless to wear such an attraction pulling shade.

Faint for Fuchsia is the boldest and coolest of the bunch. I usually just dab it on to get more of a stain and not so much color but still I didn't wear it that whole much.

Rimmel's Glow-rious Pink was the biggest disappointment because I only put it on once and I loved the shade and sheen, it felt moisturizing but then it started to get bitter so I wiped it off and now it is going into the trash bin.

Next is Candy Love which is lighter but just as creamy. I love it and when they were discontinuing it I wanted to grab as many back up as possible, at the end I only got one and I gave it to my mom who used it all up.

Rose Kisses is deeper rose borderline rusty red and I' m just not into shades like that. The pigmented formula is also something I'm not too comfortable with so I was never really interested in picking more shades. 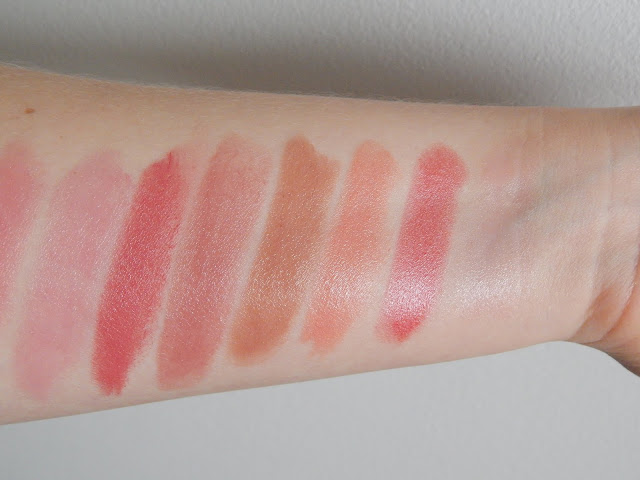 Tawny Rose is such a lovely neutral pinky-nude shade with amazing moisturizing formula. It is such a shame that I can't find it anymore because I would get it in a heartbeat and this time I would finish it.

Latte is more brown toned nude which can look very striking or monochromatic. Like, I mentioned this was my favorite nude which says a lot because I normally don't go for nude and now I only have one more nude which is way more sheer and I use it instead of a lip balm.

Tempered looks so alive and pretty here. I kind of want to take it out and use it but I know that this particular lighter shade clashes with my natural lip shade and it just doesn't look the best on me. I think that my sister who is paler and has less pigmented lips could rock it.

I could not get a nice shot of Country Rose. The silver sheen just doesn't photograph well. There isn't any shimmer or glitters but that special shine that when you apply it all over the lips it looks like you have done much more (lined, and used at least two different shades with some gloss in the center of the lips, if this would be brown it would remind me of the 90's lip, maybe the new Luminous Velvet lipsticks will be similar ). I wish they would make more shades with this kind of finish because it is spectacular.

Color changing Wish I was a Mermaid lipstick is the very last one and I waited approximately 5 minutes for the color to form but it is still too faint to really see it. On the swatch it just looks glossy and that is mostly how it looked on my lips.

They will all be trashed since their old age and now I'm looking forward to rediscover the rest of my lipsticks and I will try to finish as many as possible next year to really get down my number.