another campaign from Avon has finished up and I picked some 'new' products to get me ready for the Spring. 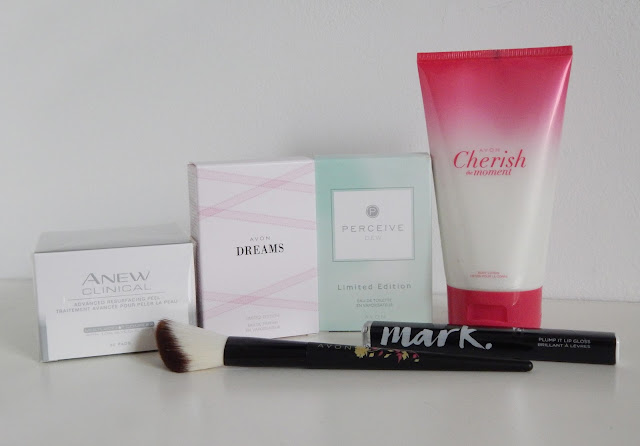 First box is Anew Clinical advanced resurfacing peel where you get 30 soaked in glycolic acid pads. I haven't finished the ones I'm using right now but they were on such a good sale that it would be a sin if I would skip on them.

Next two boxes contains 30 ml bottle of perfume. They were part of a set which I split with my sister (one perfume, nice bag, supershock mascara and plum it lip gloss). I thought that the floral Dreams perfume will be great for the warmer months and after a first sniff I can already tell that I will love it. The other one, Perceive Dew I just have to get because I already have the other two scents from the Perceive line and it was kind of logical to get this one as well. I haven't tried it on my skin jet but it convinced me with more of a fruity notes.

In the tube is Cherish the moment body lotion. Last year I used up lotion in the Cherish scent which was nothing shorter than amazing so when they came out with new version of it I wanted to try it but it took me a while to actually pick it up. I can't wait to start using it and see if I like this version better than the original.

Up front there is the limited edition blush brush. I currently only have one blush brush and I wanted to pick another one up for a long time. I came across this one which was on sale and picked it up. I haven't tried it jet but the bristles feels so soft. This could be my softest brush.

The last item is a lip gloss. It is from their 'new' line Mark. There are a lot of make-up items with the mark written on them but they all look like old products to me with a new packaging. The old line of glosses was called 3D now they named them Plump it lip glosses and mine is Clear (part of the set where I couldn't pick my own shade). I will test it out to see if they are still cooling and tingly with mint scent. I used up my last one two years ago and I have been missing it so much. The only reason why I haven't picked it up sooner is the fact that I have over 30 lip glosses in my possession and I just wanted to use some of them up before picking something new.

Thank you for reading and have a nice day
Posted by Bear Woods at 6:15 PM