lately I have been drawn to the lovely plums and golds on my nails and so I have rediscovered some old favorites and also some gone bad formulas... 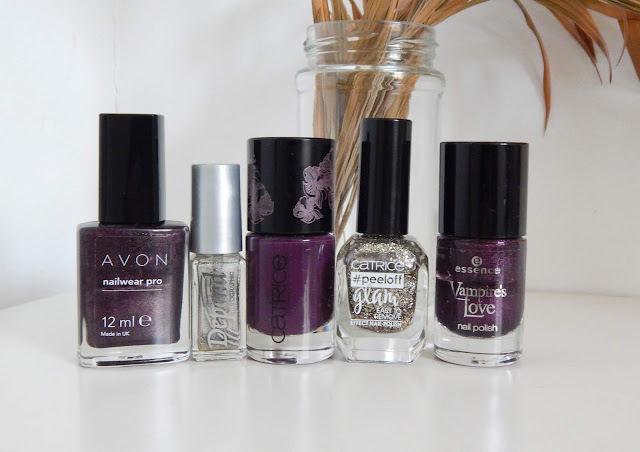 Lets first start with the lovely Avon Night Violet. It is rich brown toned plum with tiny golden shift, very rich looking and still very liquid (that seems to be the case with Avon nail polishes) but unfortunately it doesn't dry properly anymore. I have used up almost half of the bottle and we had a good run.

Tiny 5 ml bottle of Depend Sand Beige bottle is all used up. I remember winning this cutie in a giveaway and for the first year I only treasure it until I discovered how awesome it looked on the bright sunlight. This was from their holographic collection and it was quite intense warm gold polish, no wonder I completely finished it up.

This next bottle belong to old LE from Catrice and it is named Doris' Darling. It is very dark plum with simple cream finish. I initially bought it to use it as a base for shimmers but I was surprised at how much I liked it on its own. When I wanted to spice things up I just added some golden glitter/shimmer and I was ready for a party.

Peel off Catrice When in doubt, just wear glitter was fun when it lasted. I received it last year and since then it become quite goopey and it doesn't dry anymore. I'm aware that the texture is a bit gummy because of its peel off claim but after one year it has become unusable so I'm throwing it away.

The very last one is the one I was hunting down. I saw it on promo photos and I just had to have it. Essence True Love is dark plum with intense pink shimmer which makes it appear lighter and bolder on the nails than in the bottle. I remember how excited I was when I finally got my hands on it but after first application my love faded. There was nothing wrong with the polish itself I just realized that the color on me just wasn't so special or thrilling. As you can see I did used it but now it is all thick and goopey so it will be joined with the rest of them in the trash.

These five bottles makes my collection smaller for 14 bottles this year alone (I did add 9 new ones in so my collection so far only went down for 5 but still, I added less so I still count it as a success). I am still on a roll with this project use it up and soon there will be more.

Thank you for reading and have a nice day
Posted by Bear Woods at 3:48 PM