finally back at Lush

I haven't been at the Lush store for two or rather three years and when I was in town I just had to make a 'quick' stop. I know that people working there are always so nice and full of knowledge that they always convince me to take more than I anticipated. This time I made myself a list and I planed to stick to it... 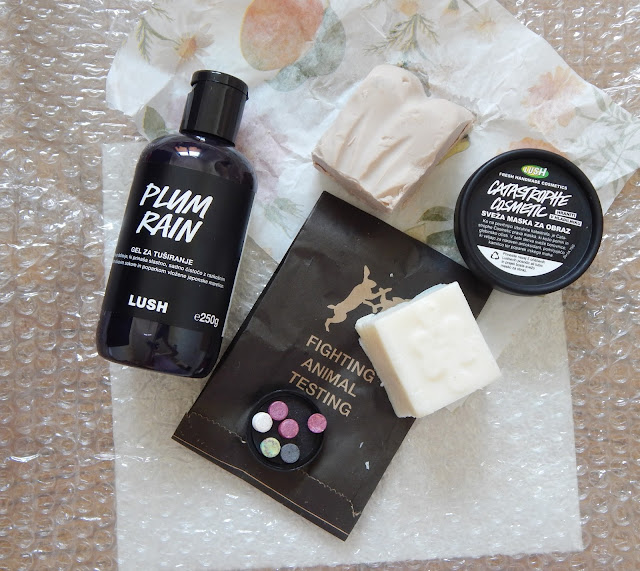 Of course I failed. The guy who was helping me around was offering me multiple products (bath bombs - I don't have a bath, lip scrubs - what is wrong with a toothbrush?, SPF body wash bar - you rinse it off, how does it work? Do you have to take a shower every four hours to reapply?) he was so sweet that at the end I felt bad for turning down every suggestion that when he gave me this body wash to sniff I put it in the basket even though it was expensive. It is Plum Rain which smells like ripe plums with something fresh in the mix like sage or salty water. The scent is very invigorating, it would be perfect if you take showers in the morning... I don't. I like to cleanse my body before going to bed, bed is my clean zone but that won't stop me from using it but probably due to its price tag I won't repurchase it.

Next to it is a chunk of Fresh Farmacy face wash. The whole 'pie' looks like a giant pale pink blossom, here I only have a small piece which will still last me a long time. In the past I already had and used one up and my skin looked much better. I hope that its magic isn't lost and will help me again. If you have oily, acne prone and sensitive skin I suggest you to try it.

I decided to get one of their famous fresh face masks and after an extensive research I decided to get the Catastrophe Cosmetics one. Again, it is recommended for oily, problematic skin. It is supposed to calm down your skin and help it heal faster, it also claim to balance the natural oils which I'm very excited to see if it will managed.

Under the mask there is a white block of Aromaco deodorant. In the past I had the brown one which was really nice, it had a bit of a weird, old lady scent but once it was on the skin it went away. That one is gone so I opted for this one but it really stinks. My car and now my whole apartment reeks like an old closet which hasn't been opened in five hundred years. I only hope that when I will collect enough courage to actually apply it it won't scare people away and burn holes in my t-shirts. 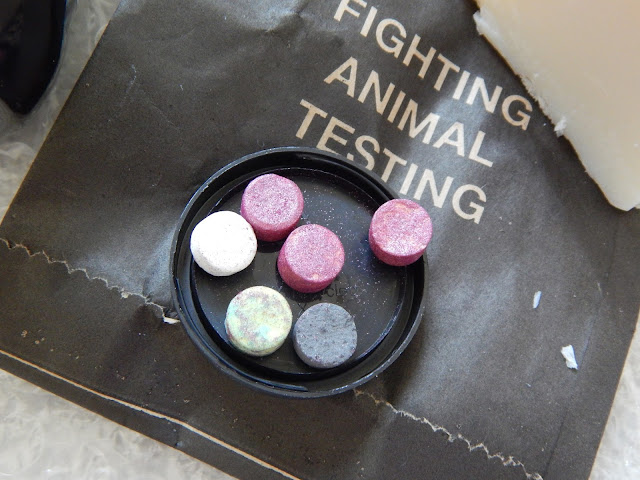 The last items looks like pills, don't they? They are actually their toothpaste in a solid form. I wasn't sure about them so the guy who was helping me around gave me these to try at home. He gave me four different ones to try out (the three pink ones are the same, I think he spilled them by accident or maybe that was a 'subtle' hint on which is his favorite ;). I tried and used all of them. I'm someone who likes that cool, fresh breath after brushing, the mintier the better is my motto and these felt like something a child would use. My mouth didn't felt fresh but rather fruity, especially the pink one felt like I'm brushing my whites with strawberries, not what I was looking for. Even the green one which is supposed to be infused with limes and lemons or the white one which is supposed to have mint as a main note didn't gave me that fresh breath. They were fun to try but I won't be spending my money on these. Is there someone who loves these, let me know.