I'm back with some empties. This time all but one are ether already repurchased or I will get them again someday. There are some really nice products ahead. 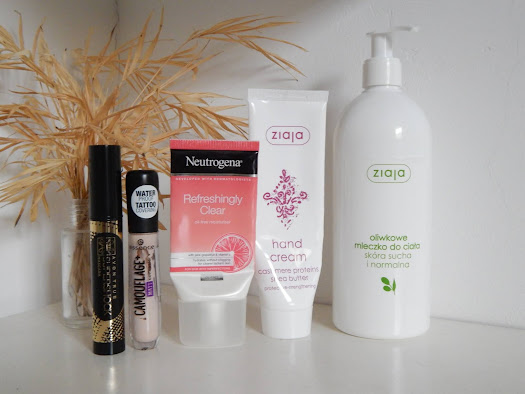 This is one of my absolute favorite mascaras. It is Avon Supershock mascara in black with a limited edition packaging (otherwise it is plain black). I love the wand with its rubber head and tiny spikes which combs through every lash and separates them like no other. It hold a curl nicely but it doesn't elongate them but I'm cool about that. I am already using a new tube of the same mascara and I couldn't be happier. 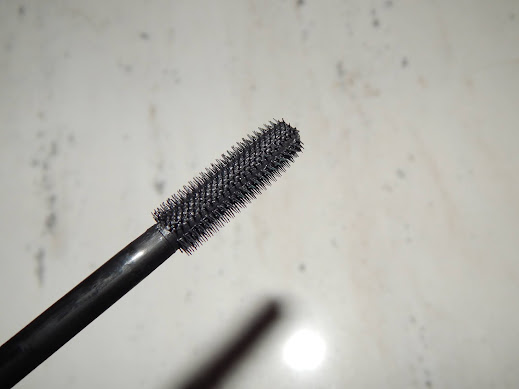 This wand looks like it is washed, completely clean but trust me, there is still enough mascara left on it to make lashes look bomb. I used it for a couple of months and now I started to notice that it doesn't hold my curl any more so I'm replacing it with a fresh one.
Next is Essence Camouflage matt concealer in the shade Light Rose. I'm a massive fan of the Healthy Glow range of these concealers (the same packaging just instead of matte it says healthy glow). The thing is that when I was in the store I could not find my beloved version so I picked out this one and honestly I don't notice any big differences beside the shade. This is not dry as I was scared but it is super creamy and it doesn't sink into my lines. At the moment I have healthy glow version but in the future I don't care which one I will get as long as it is the light enough shade for me.
This Neutrogena Refreshingly Clear oil free moisturiser with Pink Grapefruit got me with the oil free claim and it reminded me so much of my 'regular' one from Neutogena (Visibly Clear line) in the orange tube with oil free claim on the front. On me this one performed the same except this one has a noticeable grapefruit scent. Below I will even put photos of the ingredients list (sorry for the bad photo but since the one in orange tube is full I wasn't able to squash it to get all the writing on it). The list is super similar and no wonder they both work for me.

At the end there are two Ziaja products. First is hand cream with cashmere proteins and shea butter. At first it can be a bit oily especially if I put too much on but otherwise it protects and nourish my dry hands nicely. Light scent never bothered me and this cream never failed me. I would like to finish up a hand full of hand creams that I have and then I would repurchase it again.

Very last is Ziaja Natural Olive body lotion for dry to normal skin. It comes in this gigantic 400 ml bottle but I was surprised that I was able to finish it up so fast. It has a barely there scent, nothing too specific, I would say it smells like a lotion... This too can be a bit oily, the cream absorbs fast but slight oiliness remains which I don't like too much, this oily film would remain and it started to annoy me. My skin seems to like it because it didn't feel or look dry, so something in this formula is right, for me it is just that excessive film that bothered me and I won't repurchase it again.

Thankyou for reading and have a nice day