I'm seriously behind with all of my posts but I at least try to get my empties on time (which means that I can take the trash out  ;). 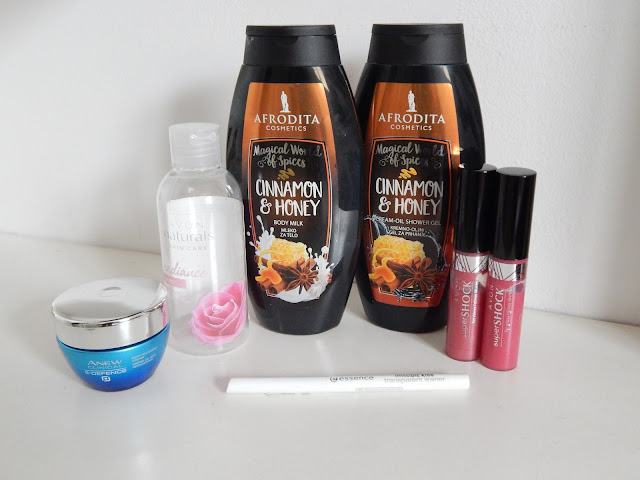 I cleared out my Avon Anew e-defence cream which I used as a night cream. It absorbs into my skin within minutes but I prefer my Neutrogena for the day. I usually paired it with some oils and it worked. My skin felt hydrated and taken care off but I didn't notice any drastic changes so I will continue to look for something outstanding.

Avon naturals rose toner was a bit blah. It smelled nice but it didn't make a difference in my skin and my mom claims the same thing (we don't live together anymore so we each had our own bottle and been testing it out and came to the same conclusion). The awesome scent just wasn't enough to keep me repurchase it again.

Afrodita's cosmetics was selling body milks and washes in sets (I think they are limited edition but I don't know for sure, they have a couple of other winter inspired scents). I honestly couldn't smell Cinnamon or Honey in the products, they smell nice, sort of creamy and warm. They weren't bad but also not amazing. Both had very thin and liquid consistency so I used them up super fast, think one month which I think is too fast so I won't be repurchasing.

Avon used to sell these huge SuperShock lip glosses. They have huge wands, fantastic melon scent and they lasted for quite some time but are old. Just last year I tossed my first one in peachy gold shade and now I have decided to toss the last two ones. First is Tickled Pink in a very natural but sparkly hue, the second one is my favorite and is called Ravishing Rose. I wanted to use them up last year but I don't think I used them once, I call this a fail and a clear sign that they are no longer needed in my collection and I can throw them in garbage before mold starts to grow.

The very last item is Essence invisible kiss transparent lip liner in Multitalent Wonder. It is basically clear lip liner. My first one was also from Essence but it was in the wooden format and I fell in love but since they discontinued it I bought this replacement (I have two more backups to go through and now even this one is no longer sold). It feels a bit waxy but it glides over the lips and fills in the lines or if your lips are chapped it will glued them so when you go over with a lipstick or lip gloss your lips will look like they are in perfect condition even if they are not. I cannot even imagine not having something like this in my stash, it has become a must just like a concealer or a mascara. I have to admit that I prefer the wooden pencil over this one because it was thicker and it didn't broke, with this one I have to be extra careful and even then I manage to break it (it happened three times and every time I wasted precious product). I know that Essence now don't have anything similar in their collection but something like a lip primer is coming in February, within Catrice line there is a chubby pencil that might be something similar and Avon has a clear liner in their brochure so I think I'm good.


Thank you for reading and have a nice day
Posted by Bear Woods at 10:17 PM