this is the last empties post for this year. I tried to finish as many products up as possible so I will enter new year with less clutter but I still have a couple almost done products that will just have to get used up next year. 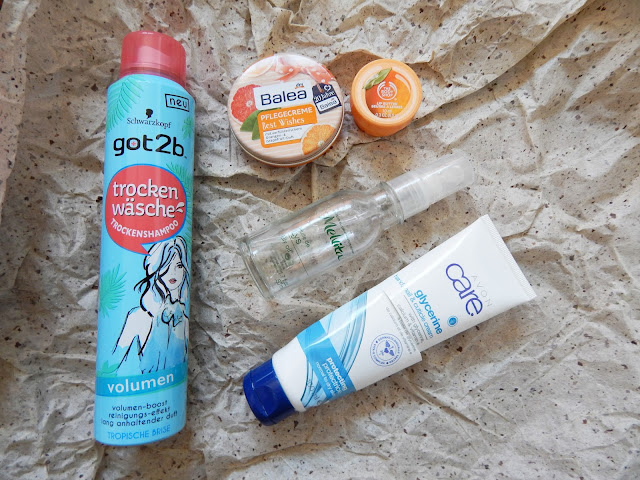 To get the big bottle out of the way lets start with this Got2B dry volume shampoo. I loved the one in a big hot pink can but it is no longer sold so when I saw these colorful bottles I just had to try at least one out. To me it smells like a baby powder with some fake coconut mixed in it, not the biggest fan but still better than Syoss or Aussie ones. It leaves white cast on the hair so I had to shake and massage my hair really well to make it less obvious. It managed to cover my greasy scalp pretty well and I thought that I would repurchase it but I found something better for even less (Batiste Blush scented dry shampoo  ;).

Balea Best Wishes Orange and Grapefruit multipurpose cream is the second one I used up. Last year at the exactly the same time I finished up the Freesia and Violet scent that I loved so very much and mostly used it as a night cream. This orange version was more fresh and citrusy, the texture was the same, very light and fast absorbing but I didn't use it often on my face but mostly on my dry hands. The scent and the fact that it is around two if not three years old made me rethink and just to avoid agitating my face I rather used it on my hands which aren't so sensitive. This scent is gone but a couple of months ago I bought Peach one and I'm so excited to see if I will like it better than the Freesia and Violet which was my favorite.

The little pot is The Body Shop Mango lip butter which was given to me by my big sis when she went abroad (that was before TBS was available is Slo.). This smells divine and I will probably get myself a full pot of body butter but it is expensive so I'm postponing. The lip balm had nice light texture which absorbed way to fast for my liking. I would use it at night to pamper my lips but when I woke up they were dry and thirsty. I noticed that it didn't do much so I won't repurchase it again but I would get some other product with the same scent because that was great.

My third Melvita Lily's oil has come to an end. I love how well it heals my acne scars and hyperpigmentation. It doesn't happen over night but if I use it every second day at night over my night moisturizer my imperfections disappear faster (it takes around two months for the bright red dot to heal as if I don't use the oil I can see it for months and they are really hard to cover up even with the best concealers). I will most definitely repurchase it for as long as I will have acne scars.

The last product on the photo is another beloved product but I lost track at how many I used up. It is Avon Care glycerine hand, nail and cuticle cream (I usually get the limited edition packaging, the ingredients are the same just the outside is a little more fun looking, I actually already saw the packaging for the Spring and I will stock up for sure). The cream is fast absorbing and super nourishing, my dad who has sand paper dry hands don't like it (he prefers much heavier and greasier Afrodita's creams but I can't stand them) but my mom, sister and I swear by it. Like I said this is the 'normal' packaging with barely there cream scent. In the Winter they just repackage them, they do the same in the Spring but often ad some sort of a scent. This Spring it will be Jasmine  ;) 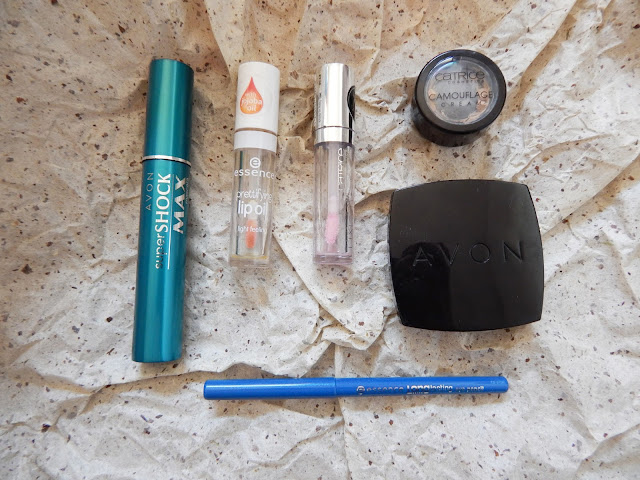 I had way too many products to gather on just one photo so I split them. Here the first item is my beloved Avon SuperShock Max mascara in black. It separates, elongates and hold the curl on my lashes at he same time. It is one of my favorites with a reason and this is my third or forth used up tube.

My lips were on the verge of drying out so I pampered them with a lot of oils. At night I would use Essence prettifying I care for you, Honey! lip oil. The scent is so lovely and soothing, it stayed on all the way till the morning when I would brush my teeth and apply fresh coat of Catrice luxury lips intensive care gloss oil in Rosachella Festival. This had a barely there scent/taste and it didn't last as long but I think it was a little better at moisturizing. They both carry very little product, Essence 4 ml and the Catrice just 3 ml so they were gone super fast but my lips are soft and nourished (I have one more from Catrice and four from Essence left, when they will be gone I will have to find something similar, in the near future Catrice will have a limited edition with two lip oils, I hope they will be any good).

On the top there is Catrice camouflage cream concealer in 010 Ivory. I fell in love with this baby the first time I used it. The shade is perfect for me and the slight yellow undertone matches me to the T. The coverage is fantastic and never too obvious. I already bought myself a backup and I hope they will never discontinue it (they will move out the three colored versions, yellow, pink and green so if you are into color correcting get them before the are gone for good). 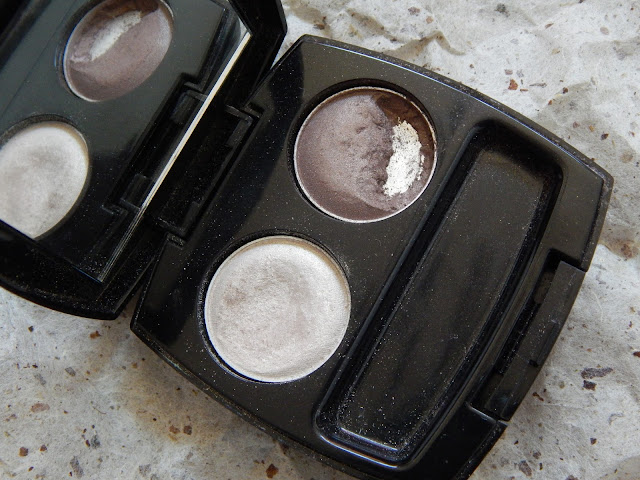 This is one of my oldest eye shadows and I still like the two colors but they don't perform as good as they used to so I decided to declutter them. It is Avon duo in Healthy Glow (it is still available under the same name just the pans are now squared). The first shade is that typical champagne gold that I use so very often but now it has a major fallout and is just unusable. Golden shimmer end up everywhere so I just don't want to bother with it anymore plus I have so many other golden colors that I can use. The other one is a beautiful deep chocolate brown with some golden shimmer. I find it to be a bit dark so I started to crumble it and mixing it with another peachy shade to create custom shade that I actually really love to use. I still decided to toss it because I bought two duos at the same time, the other being Nutmeg Shimmer (no longer sold) and it has the exact same dark brown shade in it. 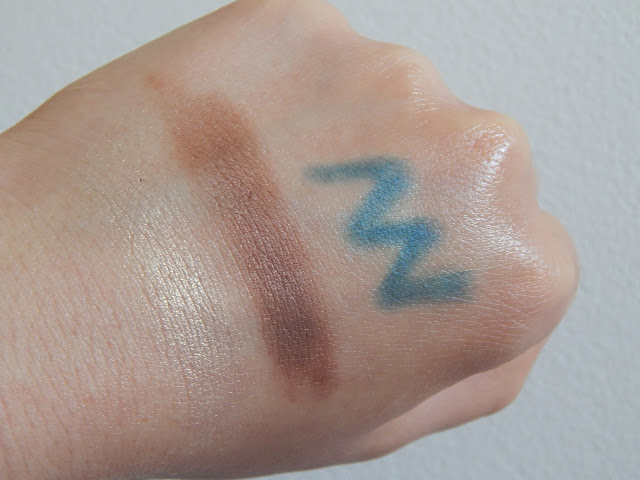 The very last item is Essence long lasting eye pencil in Cool Down. Beautiful bright blue shade but I rarely wore it on its own. I usually applied it over a black because otherwise it is a little too vivid for me. This formula is fantastic and for my hooded lids that tend to smudge almost every pencil this one stood the test of times and stayed put. I would buy some more shades from this line but I just figured it out that this line of pencils is discontinued!!!! They probably replaced them with the wooden Extreme lasting line and I already have one shade from it and it is also great so I guess I shouldn't be so very upset.