this time I took some more time off from blogging. It is not that I don't have products to talk about, it's just me being lazy and enjoying in the first Spring rays. What about you? 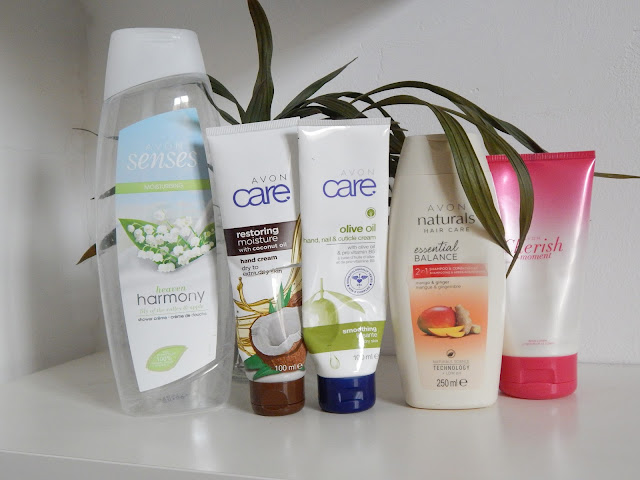 This time around I have really a lot to cover so I will try to be as short as possible.
First product is nothing special, just a body wash but the scent is so charming that I keep buying it. It is Avon Senses Heaven Harmony with Lily of the Valley and Apple scent (I even have it in the hand wash version). I usually just get the big bottle of it (there is even bigger bottle, 720 ml, but it is too big to fit in my shower shelf but I get that one for washing my hands  ;) because I know I won't get sick of it.

Next are too Avon Care hand creams. First is the new with Coconut oil and second is older with Olive oil. Coconut has a slight scent that isn't too overpowering, the texture and ingredients are very similar to the standard/regular Care cream in the blue tube which happens to be my favorite hand cream. This is just the slightly scented version of it and I really like the scent so I already repurchased it. The olive one is creamier and almost a little heavier. It doesn't absorb that well into my skin and also when my skin is super dry it just doesn't help much, the scent is barely there but I won't buy it again because it is not providing my hands with enough moisture. I will rather get the regular Glycerin or the Coconut one.

This used to be my favorite shampoo and conditioner ever. It is Avon naturals Mango and Ginger. I remember when I still lived with my sister we would share it and keep repurchasing it. After a couple of years I bought it again and while I love the scent I don't think it did much for my hair. It is not bad, it doesn't make my hair dry or fizzy but it also doesn't make them silkier or smoother. I don't know, it just isn't outstanding but my sister still loves it. I guess our hair types aren't as similar as they used to be.

The last tube is slightly hiding in there but it is a lotion for Avon from the Cherish the moment line. I used the first one called Cherish and I really liked the scent so much that when they came out with the second version Cherish the moment I knew I had to get it. I liked this one a little better, it is more fruity opposed to floral and they both have something fresh to it. It is the perfect scent for the Spring and maybe someday in the future I will repurchase it again but first I have to go through some lotions that I already have. 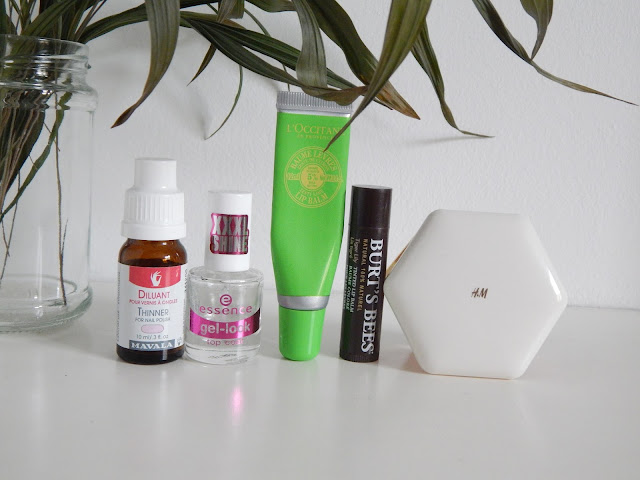 I finally finished up this Mavala nail polish thinner. It is not that I was sick of it it is just that I had it for so long but recently I am trying to revive so many nail polishes and my sister is giving me hers to fix so no wonder it got empty. I don't know what would I do without this little miracle wonder, I guess I would have to toss so many beautiful colors :(  I already bought new bottle but this time it is from ArtDeco because they had some discount and it was cheaper, I also tried it and it works so I'm good.

This next bottle is also very old and I don't even know if they make it anymore, probably not but back in the days I used this one constantly. It is Essence gel-look clear top coat. I would apply a thin coat on fresh manicure and at least once during the following days until I would remove it completely and use something else. I used up so many bottles but I don't know when I stopped using top coat because now I rarely use it unless it is some kind of a shimmery or glittery top coat. I still have one bottle of clear top coat and I will try to use it more often if not to make my manicure glossier or to help it last longer then at least to use it up before it dries out completely.

First lip product form the bunch is L'occitane Zesty Lime lip balm. It smelled really nice and the product itself was a bit thicker which is not my favorite thing. At first it looked almost white but when I spread it over my lips it got clear and slightly glossy. It wasn't very moisturizing but the worst thing about it was how gunky it become after a while. I'm always rubbing my lips together and whenever I wore this balm I had to remind myself not to do it because if I did I would push the product on the sides of my lips where it would gather and turn white again, almost as if the sides of my lips aren't warm enough and it got a little thicker. The end result was product buildup especially on my thinner upper lip and to me that looks nasty so I would only use it around my apartment and I was so glad when it was done. For the hefty price tag these just aren't worth it even though I liked the scent.

The next lip balm is from Burt's Bees and it is the already discontinued Tiger Lily, peach shade. I had the pink one as well and both weren't nourishing enough but the color was nice on the lips, nothing too much but if I used it all day long the color could build up and it looked like a little too much (whenever I took it with me I also brought another clear balm and I would alternate, not just because of the color but also to actually moisturize my lips). On the photo below you can see that there is still a little left but I decided to toss it anyways. My lips are getting dry and this non nourishing balm did nothing so why keep it? This was my last lip product for them (I had five in total) and I wasn't happy with any of them so I really don't think I will buy more form BB. 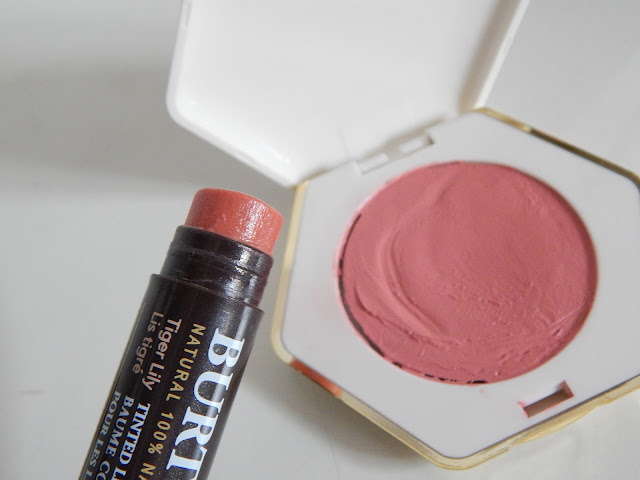 The very- last item is from H&M Beauty and it is one of their cream blushes. Mine is in the Peachy Rose shade that was given to me by my sister. I used it quite a lot but I could use it even more, the shade was beautiful and the formula was very pigmented so I should ether use it every single day or I should have a deeper complexion in order to use it up completely. My heart breaks because it was a gift but it has been with me for two and a half years, the texture is getting more mousse-y and that tells me that it is not safe to use it anymore. I was thinking that I will clean it up and keep the packaging but it doesn't really have any sense. if the compact would have a mirror...
I hear a lot of good things about their powder blushes but the last time I was in the store and I walked through the beauty counters I picked up two more products which will be reviewed soon.

Thank you for reading and have a nice day
Posted by Bear Woods at 4:12 PM