I still have so many nail polishes and it was time to declutter some more. Two are completely finished the rest are just too thick to be manageable. 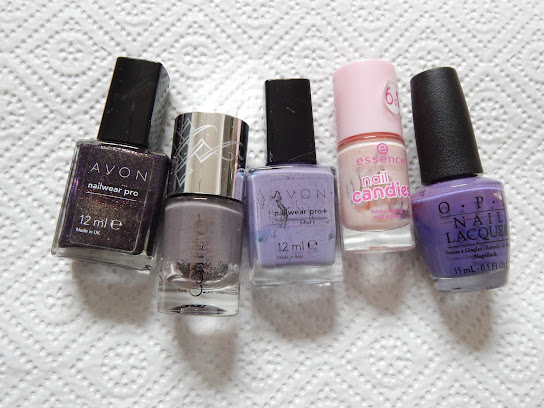 First is very old Avon nail polish in the shade Violetta Sparkle and it has a very dark purple base with golden flakes. Opaque in just two coats. I really liked it but I wasn't using it lately. I have a similar shade from Misslyn so I'm ok but something is happening with this brand in our Si stores. The last time I was there the stand was half empty... I wonder if the brand is pulling form our market.

Next is limited edition Catrice nail varnish in the shade Paralilac. Very interesting taupe shade because sometimes leans a little towards grey and sometimes it had a purple sheen... this is one out of the two that were completely finished up. Even though it was unique and quite special I don't want to wear such shades anymore.

In the middle is another super duper old Avon bottle and for this one I don't even know the name. It is not written on the bottle (probably it was mentioned on the box) so I refer to it as Lavender :) I love lavender hues and this one is just perfect, on the nails it dried a little darker but still fine with me. The last time I used it, it just didn't want to dry up so I have to part with it but thankfully I have another very similar shade also from Avon.

I bought a bunch of these Essence nail candies, especially in the shade Soda pop & Candy shop when they were discontinuing them. This one looks very sheer and only with three coats I get a slightly milky layer. I was using it as a base coat because I don't like to use three colored coats over my nails. I found another nail polish from Essence which looks almost the same but after two coats I get the desired milky look (Sweet like Candy). I still have two bottles left and I will try to finish them next year.

The last item was given to me by my sister because she wasn't using it. it is O.P.I. Lost my bikini in Molokini. Love the medium vibrant hue but the formula for me wasn't the best. The very next day I got tip wear on almost all my nails but since the color is so beautiful I used it a couple of times and then I got sick of fixing it, so at the end I will just trash it.