another month has come to an end I feel like the Winter is just around the corner and the New Year with its resolutions and failed attempts to reach my goals...  It's all about spinning and catching the snake by its tail. Do you feel the same? Like the time fly by and you are not in control?
Well these products did come to its finishing line and with some we had a good run.. 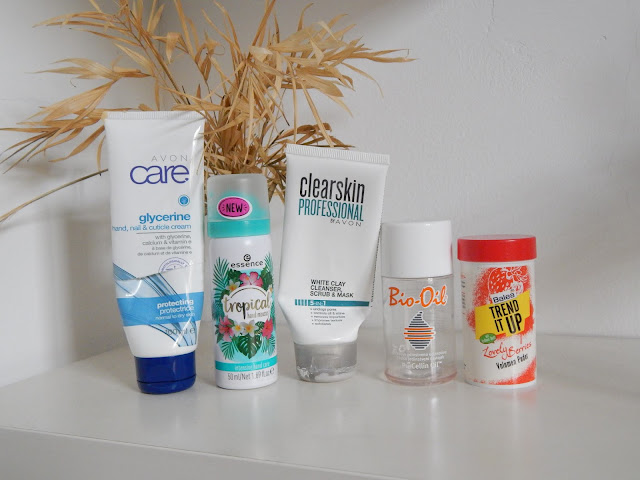 Avon Care glycerine and, nail & cuticle cream is my favorite hand cream and a long time ago I stopped counting through how many tubes I went through. It absorbs quickly and moisturizes my hands on a long run. This version is just the regular (unscented, usually the Spring ones are scented) in their standard packaging but I just ordered a new Winter themed packaging with the Coconut scent which is amazing.

Next is another hand cream, this one is from Essence and it is their Tropical hand mousse, It smells like fresh melons and it is fun to use because of its texture. I have to be careful and use a little bit otherwise it can get very greasy very quickly.

Avon Clearskin white clay cleanser, scrub & mask is 3 in 1 product but I think that claim is a bit of a stretch. Yes, it has some particles in there but they are not strong enough to do decent job so I only used it as a face wash or sometimes I applied thin layer all over my face. In about five minutes time it did its magic. It feels cooling so I wanted to use it as fast as possible because in the cold weather I don't like to use freezing face masks but it did work. It managed to clean my pores and refresh my face. My skin did approved so maybe next year I will repurchase it.

Bio Oil is very popular and well know brand of oil and I was very tempted to try it out. When I was looking for it the store had a special discount but only if you bought two bottles, if you know me then you know I purchase a pair without trying it first. The first thing is the gorgeous scent, I could lather my entire body with it and sleep like a baby. It is comforting, the texture is oily even though I have read that is light and absorbs fast. On my face it was moisturizing but nothing too revolutionary. I will use up the other bottle but I'm not so sure I would repurchase it again. Maybe now when I'm not using it I will see if my skin will get worst but I somehow doubt it.

The very last item on the photo is old Trend it up volumizing hair powder. This berry scent is intoxicating and they should make more products with it. When I picked this one up I really though that this is a dry shampoo in a can but it is not. It does nothing for greasy hair instead it makes them extra sticky. So very sticky that it hurts. I'm used to shampoo my hair twice and if I did it in a hurry with this icky powder on the next day my hair would still be sticky. It is so hard to wash away and so not worth it for me that I rarely use it and now I just decided to toss it. Volumizing powders just aren't for me. 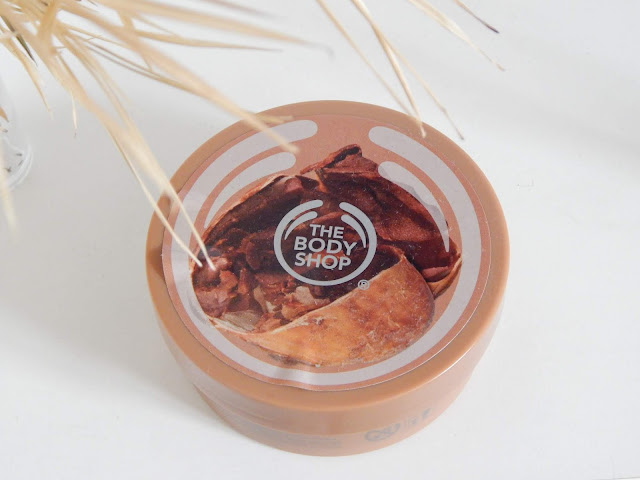 This time around I went through The Body Shop body butter, and it is Cocoa butter. I seriously thought that I will use more of their stuff since there is a shop near my workplace. I went in a couple of times and bough a lot of their butters, lotions and other miscellaneous stuff but apparently I'm saving them for some sort of special occasions... I really enjoyed this one, it is a bit thicker but I don't mind some extra massage and the scent was amazing. Definitely my cup of tea. 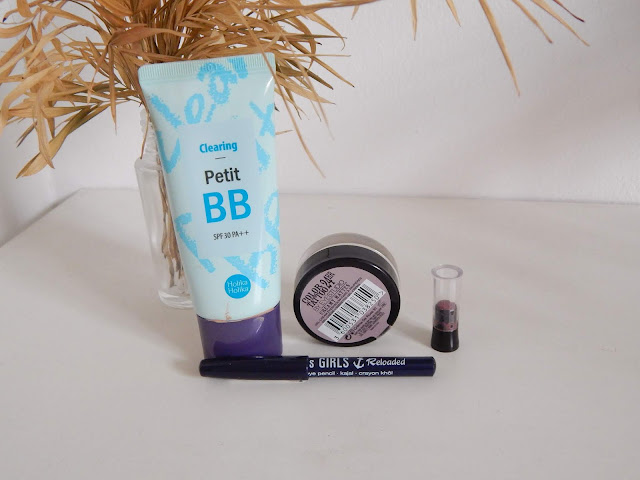 Holika Holika Clearing BB cream with the SPF of 30. I used to really like this one, it was a but dark bit mixing lighter one in made it perfect. It has quite a nice coverage and I used to wear it everyday until I found L'oreal foundation which completely replaced BB creams in my routine. I still used this one on my days off and on my neck to help everything blend together. I don't think it is still available and even if it would be I am past BB creams and now I'm just trying to use all of them up.

Maybeline 24hr Color Tatoo in the shade Creme de Rose was an impulse purchase. I already had the super famous On and On Bronze which was very bold against my pale complexion and I didn't like how it looked but it also creased within thirty or forty minutes even with a primer underneath. People were raving about the formula but for me it just wasn't working but when I got my hands on some coupons I bought two more. Creme de Rose was one of them and I'm very happy that I did buy it. This baby last on my lids all day even without a primer. The shade looks a bit mauve toned in the pot but when I blend it out it sort of melt with my skin tone. It covers the veins and makes my lids all nice and even, often I used it alone because I liked the 'bare' look. I tried to find it in the store but the biggest drugstore doesn't even carry them so I was scared that they might stop selling them but I found them in some other more obscure stores but this shade was ether sold out or already swatched so at the moment I don't have it. I think I will buy it again but in the mean time I will focus a bit more on the brown Creamy Beige which I bought at the same time. 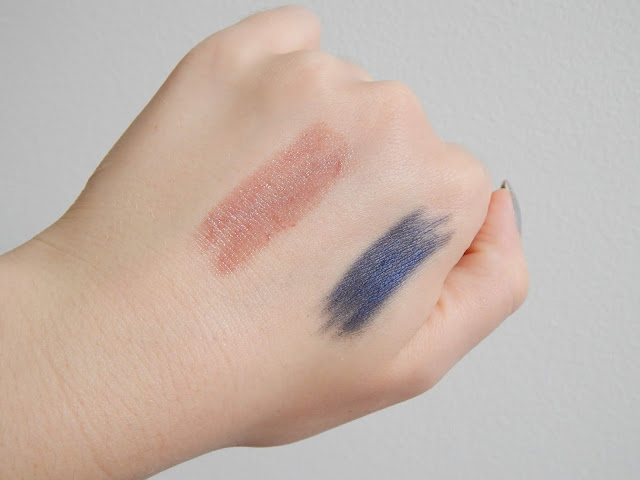 Next is a little Avon sample in the shade Amethyst Sunset. It is so old that I don't even remember the name of the line it belonged but it was the sparkling one. If you look close you can see multicolored shimmer in there but it is very small and it didn't bother me that much, the glitter didn't travel all around my lips. On the photo it looks a bit too brown, in real life it was more mauve-purple and since the formula was glossy and shiny I could do a very light and sheer coat. It just slightly deepen my lips and add some much needed shine. I really liked it and if it would be available I would buy myself a full size immediately.

The very last item is this super old Essence 50's Girls Reloaded LE I'm a Marine Girl eye pencil (it was released seven years ago, I checked). It got a bit dry and since I have some other blue pencils which aren't as old I decided to part with it. Using something so old around my eyes really isn't something to be considered safe. I hold on for so long because of the beautiful shade. It looks dark but when the light hits it you can see the royal blue reflection.

Thank you for reading and have a nice day
Posted by Bear Woods at 7:39 PM