& our secret date at night

having so many eye shadows isn't easy. In the morning I'm having a hard time picking among the crowd on my shelf. It gets a little easier with the new stuff because I feel like I have to try them out first so I'm concentrating on one palette at the time and lately it was this beauty below. 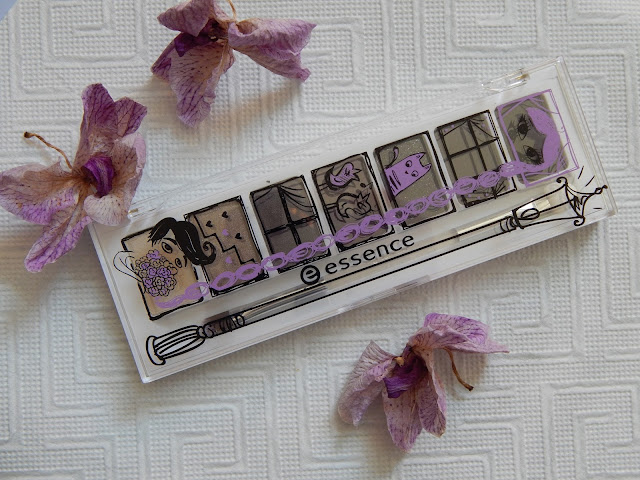 Essence & the lovely little things eye shadow palette in the & our secret date at night.
There are two other palettes with more 'me' type of shades which means warm neutrals but at the end I' m happy that they send me this one in particular because I would have never pick it up myself. When I was starting with shadows I wore only greys and silver tones, I don't know exactly when that changed but I wanted to try if there is still a place for cooler tones in my heart. 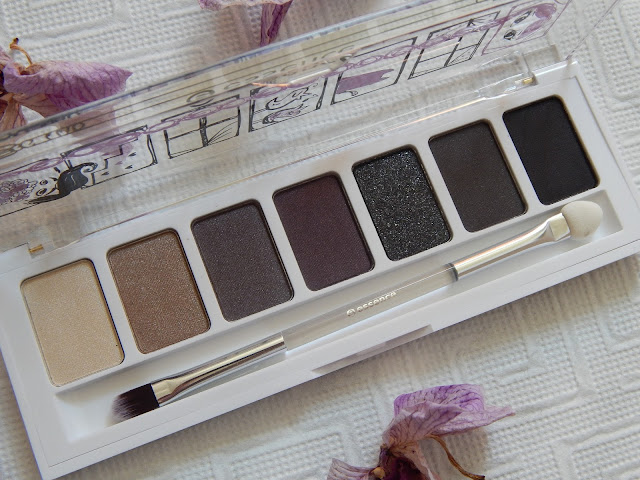 I think that the colors look beautiful in the palette, there are some warmer tones, light neutrals and also the smokey shades for more dramatic looks. 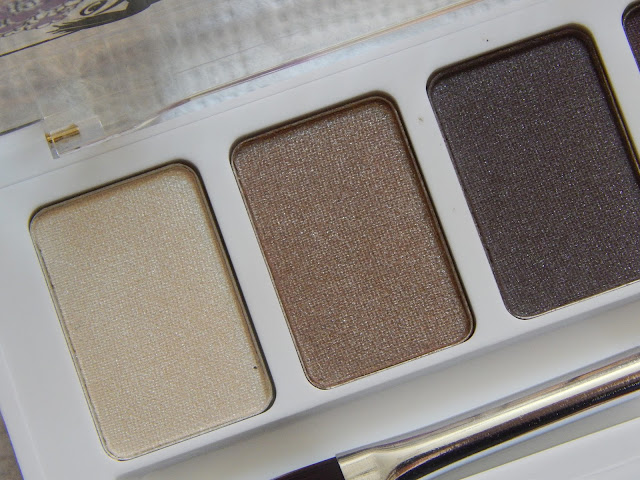 First cream shade with shimmer is my perfect inner corner highlighting shade. They absolutely nailed it and if you like loud inner corners you will like it too.

The other shade is golden but not yellow, it has more of that antique touch and that is why I love it so much. For me this one is a stand out shade and I find myself reaching for it non stop. 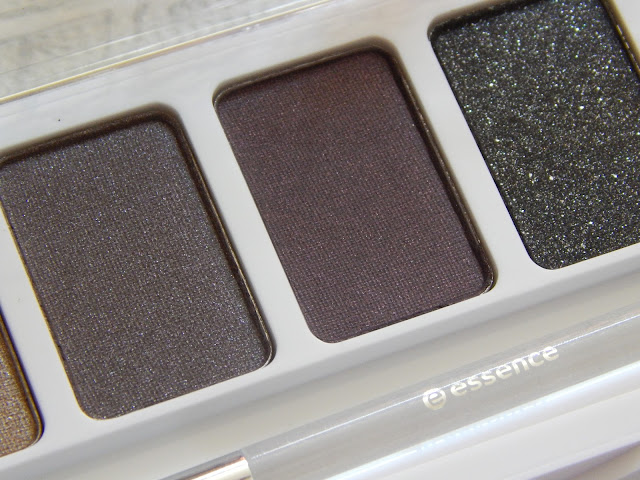 Third shade looks neutral on the pan but it is a nice brown shade and I like to apply it with a fluffy brush and place it in my crease. It is almost matte and in combination with the first two colors I can create my everyday and also favorite look.

Next to it is a very interesting shade, it is grey with red undertone but in the pan it is way more obvious than on the skin and when it is blended it goes away almost completely. On the swatch below you can notice it but on a smaller part and when it is properly blended it looses that uniqueness. I'm not gonna sit here and complain because it is very unlikely for me to use red shadow so at the end I'm happy that on the eyes it mostly just looks grey. 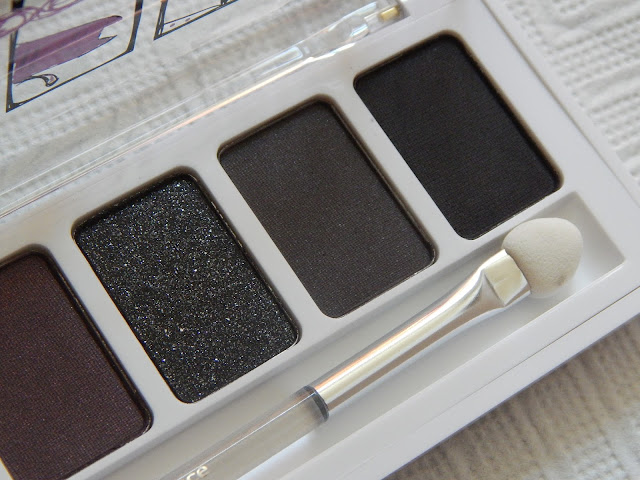 This next glittery shade is hard to miss. It is dark grey with tons of big chunky glitter which tends to fall down onto the cheeks. It is also more concentrated on the surface. After swatching it and trying to wear it the first layer came off and what is underneath is way less glittery, glimmer is still there but in more reasonable amount. The color itself has poorer opacity and is my least favorite from the bunch.

Second to last is grey shade which looks lighter on the skin and I like to use it in my crease when I'm doing cooler looks (otherwise I use the third shade to shade my eyes). Some people would say that it has poor pigmentation and they would treat it as a bad thing, I like my crease shades to be buildable as I find them easier to use.

The last color looks black but it is chalky and less pigmented on the skin. I don't like to use black shadows on myself as it can look too harsh but I like to use them opposed to liners and this one works well for that. I get much more pigment out of it if I use eyeliner brush and line my lids with it. 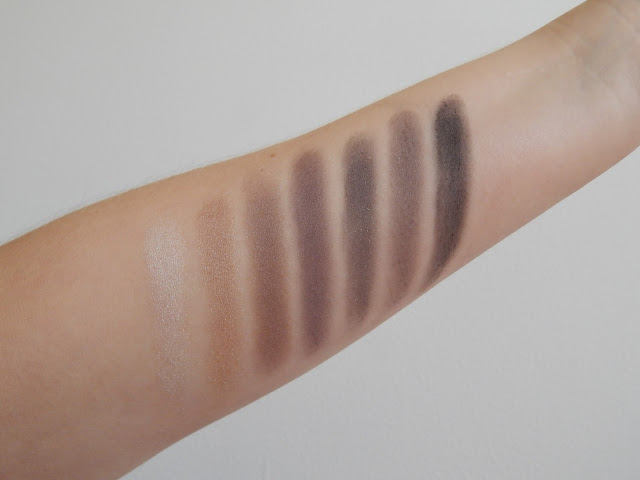 All colors were made without base and with my own fingers. 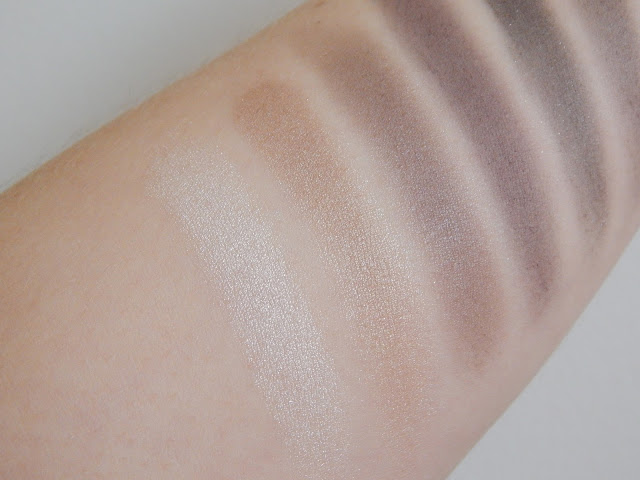 Intense shimmer is seen in the first two shades, just the way I like it, while the third one is more toned down and appears almost shimmer free. 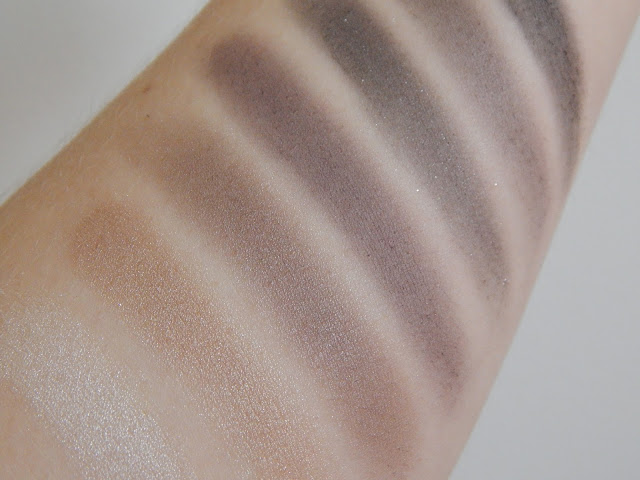 Next to my favorite crease shade there is the fourth color which has some red in it but it looses its magic as soon as you press it onto your skin. Here it just looks grey and that is how it also looks on the eyes. 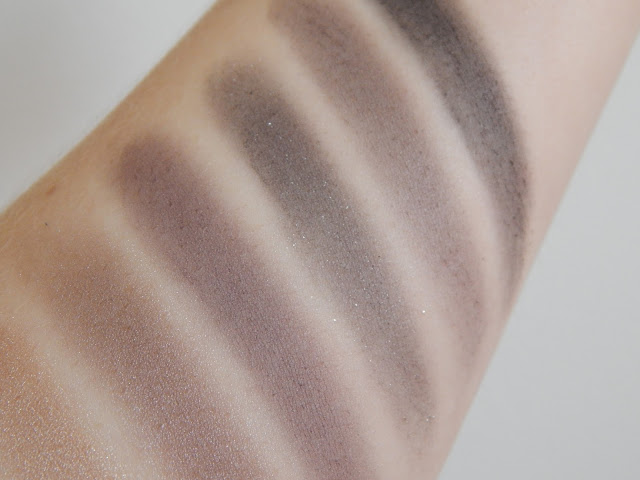 Glittery shade looks dazzling in the pan but all that shine doesn't transfer on the eyes, probably my floor were covered in glitter after these swatches were made. 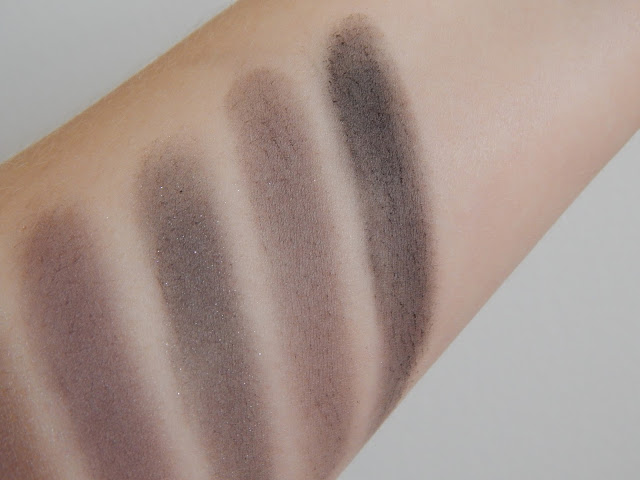 Second to last is a nice crease shade, more grey and cool toned for different kind of looks. The shade is very buildable but I prefer the light touch.

And the last dramatic shade is black but when you try to go full on it looks patchy and chalky. I don't think it is the best one out there but for precise touches it is fine and it performs great with a fine brush as a liner. 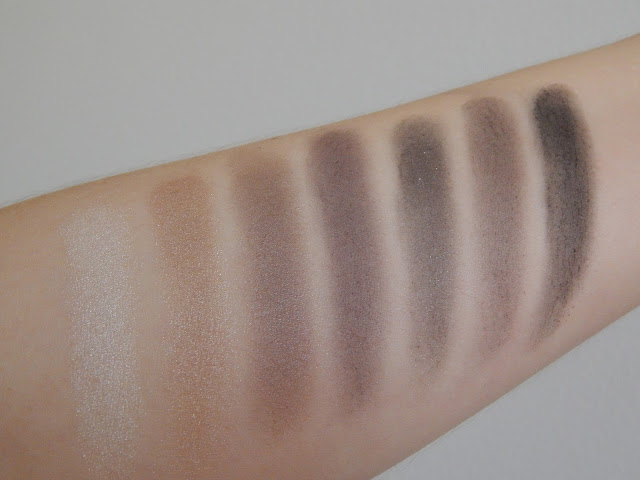 The first three shades could definitely be released in a natural trio and every neutral fan would love them. They are the most safe colors and also my favorite. That has been said but I'm still happy that I got to try some cooler tones and greys, they bring memories back and I can do some decent looks with this palette. Am I converted and will start to buy grey and silver toned shadows again? No, I'm still in the warm browns and golds kind of pool but trying something new every once in a while has never hurt me.