I haven't done one of these in a while but I decided that these three beauties are gone. There is still some left in each but since they are so old they don't properly dry on my nails and I just end up with dents and tip wear the next day. I decided to move them out of my collection to make room for some fresh ones (yes, I did some shopping and bought exactly three new nail polishes). 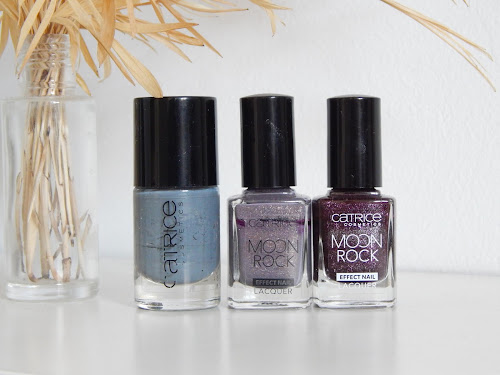 The first nail polish is Catrice London's Weather Forecast and is probably the one that started my nail polish obsession. I started watching nail polish blogs and this one looked so beautiful on photos but Catrice wasn't even available back then. Eventually Catrice came to town and I was quick to buy it. It was love at first sight but seeing it now it has more of a nostalgic value. The shade is nice but a bit dull looking grey just doesn't rock my boat. I have another super similar shade from Essence that I will use next so at the end I won't even miss it.

Next are two special Moon Rock collection shades, lavender hued one is Magical Bluelight and berry one is called Moonlight Berriage. Both are opaque in two coats or really pretty as one coaters over some other polishes (great for the days when I was too lazy to remove and repaint, I would just put one coat over and be done). They are quite old and I have to admit that they don't dry anymore and therefore are unusable for me. I really liked them, the colors and the effects still excite me but they just aren't practical to use anymore so they will have to go.

The last two shades are pretty unique and I have nothing similar but for now I will focus on the ones that I still have in my rather large collection and I won't try to find something similar just jet.